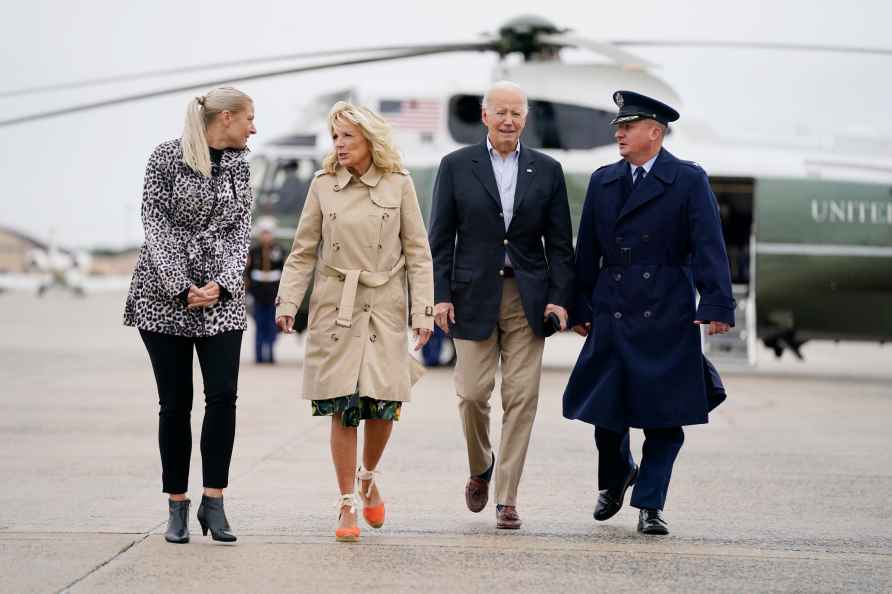 [President Joe Biden and first lady Jill Biden walk to board Air Force One for a trip to Puerto Rico to survey storm damage from Hurricane Fiona, Monday, Oct. 3, 2022, at Andrews Air Force Base, Md., escorted by Col. Matthew Jones, Commander, 89th Airlift Wing and Mrs. Christie Jones, spouse of Colonel Jones. /PTI] Washington, Oct 3 : At least 80 people were killed in the U.S. states of Florida and North Carolina by Hurricane Ian which made landfall in southwestern Florida as Category 4 last week. At least 76 people in Florida had died due to Ian, with four other fatalities reported in North Carolina, media outlets said on Sunday. In Florida's Lee County alone, the hurricane contributed to 42 deaths. The county sheriff Carmine Marceno told reporters that the projected death toll is unknown due to the insurmountable damage the county has seen. "Those numbers could go up," he said. "I don't know. I hope and pray that they don't." More than 1,600 rescues have been made in Florida since Ian made landfall there on Wednesday afternoon, according to the office of Governor Ron DeSantis. The storm brought catastrophic storm surges, heavy rains and destructive winds, and dangerous flooding to both Florida's coast and inland areas. Ian made landfall in South Carolina as Category 1 on Friday afternoon and weakened to a post-tropical cyclone that later dissipated across southern Virginia on Saturday. U.S. President Joe Biden is scheduled to travel to Puerto Rico Monday to survey damage from Hurricane Fiona, which brought heavy rains, catastrophic damage and an island-wide blackout to the U.S. territory last month, before heading to Florida on Wednesday. Biden said on Friday that Hurricane Ian "is likely to rank among the worst in the nation's history." Estimated losses from Ian's wind and storm surges are between 28 billion and 47 billion U.S. dollars, according to CoreLogic, a U.S. research firm that estimates losses from natural disasters. /IANS