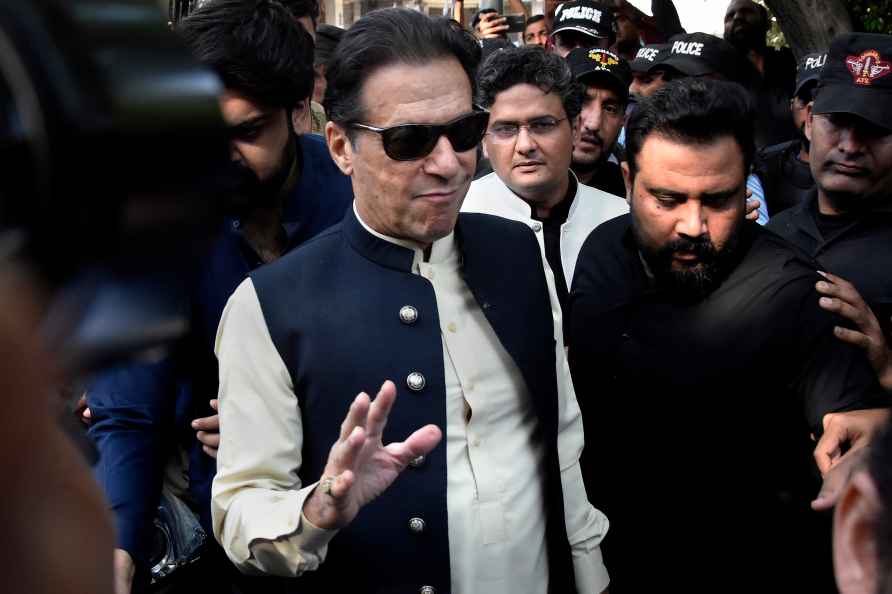 [Former Pakistani Prime Minister Imran Khan, center, arrives to the Islamabad High Court surrounded by security, in Islamabad, Pakistan, Monday, Oct. 3, 2022. The court on Monday accepted Khan's written apology in a contempt case stemming from his outburst against a female judge that was seen as a threat, court officials and a defense lawyer said. ( /PTI] By Hamza Ameer Islamabad, Oct 3 : After holding over 55 public gatherings and over two dozen conferences, institutional events; Imran khan is geared up to launch an anti-government long march and protest sit-in choking Pakistan capital Islamabad until his demand of holding early elections is met. Sources within Imran Khan's political party Pakistan Tehreek-e-Insaf (PTI) have confirmed that the date for the long march will be announced within the next six days as the party is now holding consultation and engaging with sources to start preparing for the upcoming long march. Former Information Minister and senior member of PTI, Fawad Chaudhry said that the nation should start preparing for the long march as this is the only option left to oust what he termed as "imported government of power." "This government does not hold the consent of the majority of the country and has been brought into power through a regime change conspiracy. The nation now should start preparing for a long march because Imran Khan is the true leader who represents the sentiments of the whole country," he said. "Imran Khan will be announcing the date for the long march within the next six days and that will be the final showdown against this imported government," he added. PTI sources also revealed that Imran Khan has already started directing local management of the party in all provinces to prepare for the long march. In a closed door meeting, Imran Khan said that he will not be giving any more time to the Shehbaz Sharif government. "I will not give any more time to oppressors and formally announce the date of the historic long march soon," said Imran Khan. The decision to hold a long march comes after failed attempts to reach out to coalition partners of the Shehbaz Sharif government, backdoor meeting with the military establishment higher ups, audio leaks and government's attempts to put Imran Khan behind bars in various cases including Tosha Khana case, Foreign Funding case and the ongoing talks about booking Imran Khan under Article-6 (Treason) for hatching a conspiracy narrative out of the cypher and using it to play the political game through the regime change narrative. There are various strategies being considered for the long march especially in view of the previous long march that was dealt with tear gases, blockades, house raids and assaults by the security forces on orders of the current federal minister for Interior Rana Sanaullah. Among the expected strategies and in view of the fact that Imran Khan enjoys provincial control over Punjab, Khyber Pukhtunkhwa, Gilgit-Baltistan (GB) and Azad Jammu and Kashmir (AJK) aka Pakistan Occupied Kashmir (POK), his strategy to choke Islamabad may well be focused on shutting down provinces and cutting all connecting routes towards the capital Islamabad from all sides. This will not be the first time that PTI has staged a massive protest sit-in against the then sitting government. In 2014, Imran Khan had staged a 126-days sit-in protest in Islamabad demanding the then Prime Minister Nawaz Sharif to step down and hold early elections. However, neither Imran Khan's demand was met nor the months long protest prompted the ouster of the sitting government. /IANS