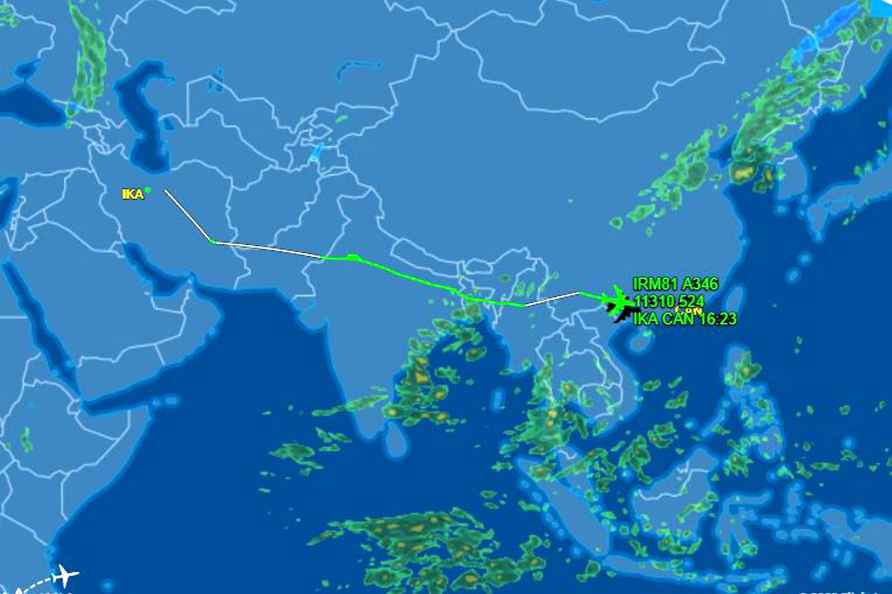 [**EDS: SCREENSHOT VIA 'flightaware.com'** New Delhi: Screenshot from live-tracking site flightaware.com shows Mahan Air's Guangzhou-bound flight crossing the Indian airspace and moving towards China. The Indian Air Force scrambled its fighter aircrafts following a bomb scare on board the Iranian plane. ( /PTI] New Delhi, Oct 3 : Indian securities authorities were on alert following a bomb threat on board an Iranian passenger flight when it was approaching Delhi. Sources claimed that the Mahan Air flight, which was in Indian airspace when the airline received the bomb threat, was denied permission to land in India due to technical reasons. As per a flight tracking website Flightradar, the plane was on its way from Tehran in Iran to Guangzhou in China. The flight continued its journey to China after clearance from the authorities as it was not allowed to land in Delhi and Jaipur. As per the sources, a call regarding the bomb threat on the flight was received at around 9:20 a.m. on Monday. Sources said that while the nature of the threat is still unclear, following the call, the authorities at Delhi airport were immediately put on alert and permission was sought for landing. However, permission was not granted due to technical reasons and the plane was diverted to Jaipur. Sources said that the plane was not allowed to land in Jaipur and it finally headed towards its destination. /IANS