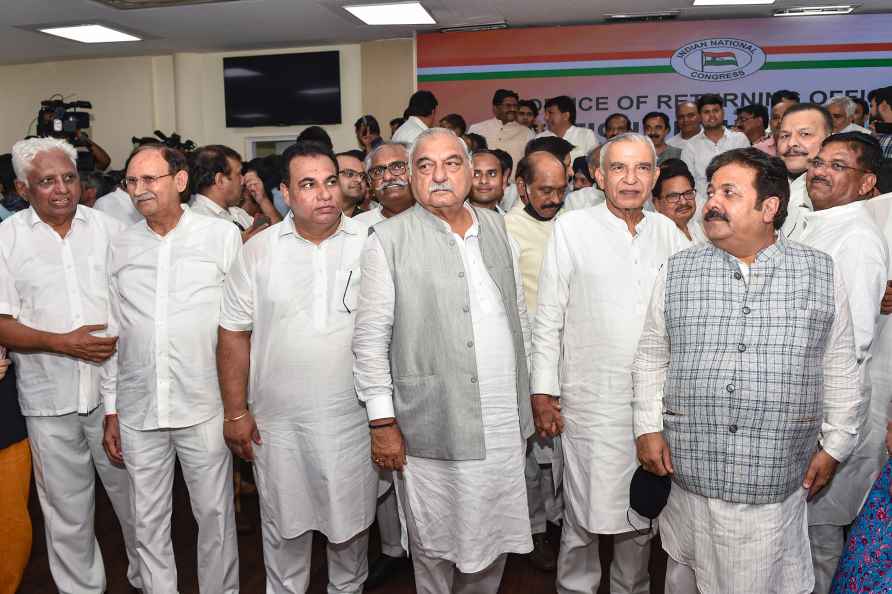 New Delhi, Sep 30 : Congress leaders Mallikarjun Kharge and Shashi Tharoor on Friday filed nominations for the October 17 party president polls, while Digvijaya Singh opted out of the race. Speaking to the media, Singh said, "Kharge is our senior and I have told him that I will be your proposer and my commitment is towards the Congress and the Nehru-Gandhi family." Another Congress leader Pramod Tiwari said, "I am going to sign papers for Khargeji. " Kharge, the Leader of Opposition in the Rajya Sabha, filed his nomination after meeting interim president Sonia Gandhi. Notably, Friday is the last day of filing nomination papers for the post. Earlier in the day, Digvijaya Singh met Kharge at the latter's residence. It is being said that after Kharge emerged as the top choice of Gandhis for the top post, Singh withdrew from the race. Late on Thursday night, the G-23 leaders, including Manish Tewari, Bhupinder Singh Hooda, Prithviraj Chavan met at Anand Sharma's residence but did not divulge details of the meeting. One of the most vocal G-23 faces, Manish Tewari, said this morning that it was time to strengthen the party and termed the recent events in Rajasthan "unfortunate". "Leadership, ideological clarity, narrative & transparent access to resources are pillars of 'A' political party, Given recent unfortunate events it's time to close ranks & strengthen @INCIndia recalling wise words of @CitiznMukherjee Y'Y& work for a Consensus & effective Presidency," Tewari said in his tweet. /IANS