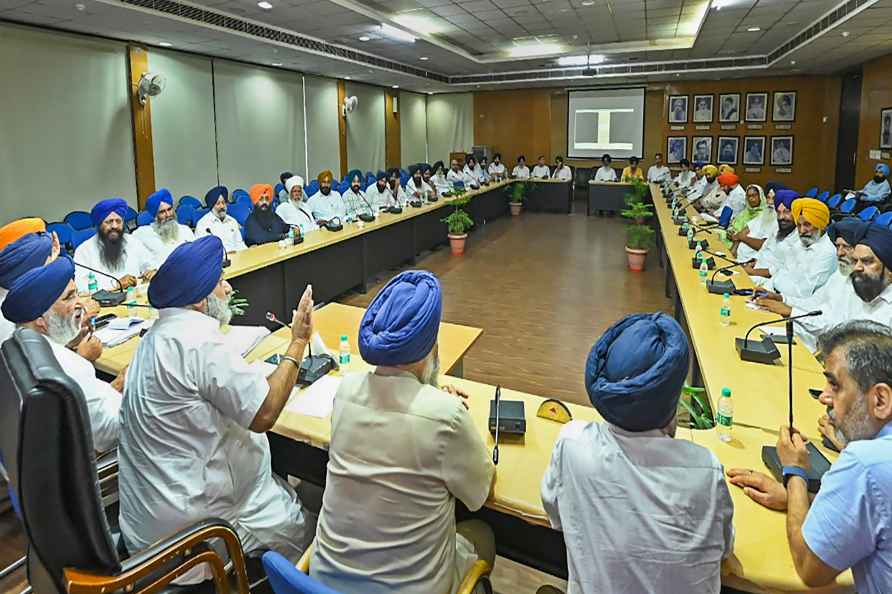 [**EDS: HANDOUT PHOTO MADE AVAILABLE FROM SAD OFFICE ON FRIDAY, SEPT. 30, 2022** Chandigarh: Shiromani Akali Dal President Sukhbir Singh Badal chairs a meeting of the party?s legislators, former legislators and constituency incharges. ( /PTI] Chandigarh, Sep 30 : The Shiromani Akali Dal on Friday endorsed the Shiromani Gurdwara Parbandhak Committee's call to hold a Khalsa March from Takth Sri Keshgarh Sahib and Takth Sri Damdama Sahib to Sri Akal Takth Sahib on October 7 even as it requested the Centre to file a review petition or pass a new law to do away with the validation of the Haryana Sikh Gurdwara Committee Act, 2014, by the Supreme Court. A decision to this effect was taken at a meeting of the party's legislators, former legislators and constituency in-charges here, which was presided over by SAD President Sukhbir Badal. Giving details, former minister Daljit Singh Cheema said the Khalsa March is being held "to protest against the interference in Sikh affairs as well as the deep-rooted conspiracy to break the Shiromani Committee". "SAD has decided to support the SGPC's initiative to highlight the discrimination meted out to the community and ensure justice is done to it." Terming the 2014 Act which was passed by the Bhupinder Singh Hooda-led Congress government as illegal and unconstitutional, the SAD leader said it was unfortunate that both the present Haryana and Punjab governments as well as the Central government had supported the move in court. "This has hurt the sentiments of the Sikh community which rightly feels that Sikhs have been discriminated against with the validation of the Haryana committee by the apex court." He said the move should be reversed to ensure there was no unrest in the community. Cheema said the meeting also took note of the inordinate delay on the part of the Central government in deciding the mercy petition of Sikh detenue Balwant Singh Rajoana. He said the meeting called upon the Centre to release Bhai Rajoana immediately keeping in view the fact that the Central government had given a commitment on the occasion of the 550th birth anniversary of Guru Nanak Dev that Bhai Rajoana's death sentence would be commuted to life as well as the fact the detenue had already completed a life term. /IANS