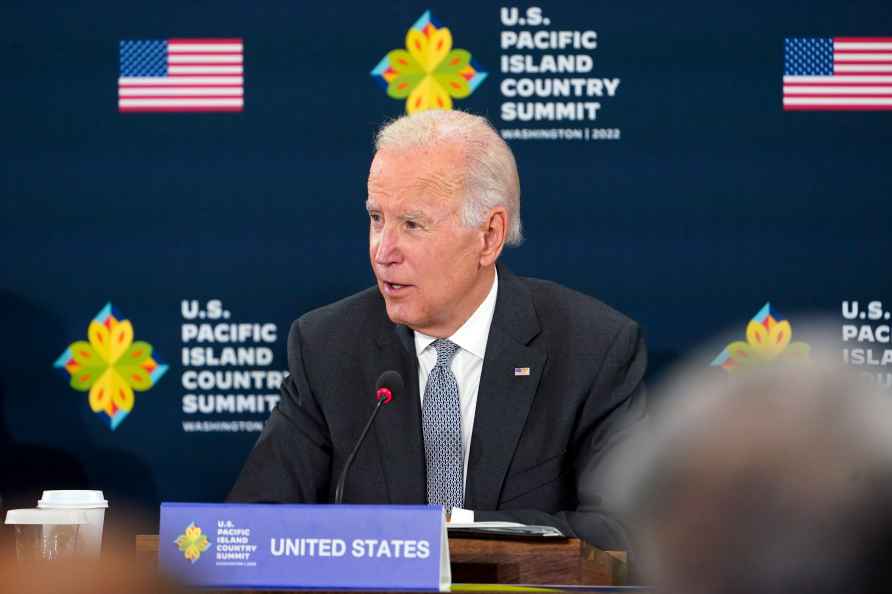 [President Joe Biden speaks during the first U.S.-Pacific Island Country Summit at the State Department in Washington, Thursday, Sept. 29, 2022. Biden is hosting Pacific Island leaders for a two-day summit as the U.S. looks to counter China's military and economic influence in the region. /PTI] Washington, Sep 30 : In response to Russia's move to formally annex four more areas in occupied Ukraine after holding self-styled referendums, US President Joe Biden said that Washington will "never, never, never recognise" Moscow's claims on Kiev's sovereign territory. The Kremlin announced on Thursday that President Vladimir Putin will on Friday formally declare the annexation of the Ukrainian regions of Luhansk, Donetsk, Zaporizhzhia and Kherson at a major event at the Red Square in Moscow. In the so-called referendums held last week, the regions voted to join Russia, the Kremlin added. Addressing an event on Thursday, Biden called Russia's move "shameless". "The US, I want to be very clear about this, will never, never, never recognise Russia's claims on Ukraine sovereign territory," the President was quoted as saying in a statement issued by the White House. "This so-called referenda was a sham, an absolute sham, and the results were manufactured in Moscow... The true will of the Ukrainian people is evident every day as they sacrifice their lives to save their people and maintain the independence of their country and in defence of freedom as well. "Russia's assault on Ukraine in pursuit of Putin's imperial ambitions is a flagrant violation of the UN Charter and the basic principles of sovereignty and territorial integrity," he added. But in its announcement on Thursday, the Kremlin said the independence of Zaporizhzhia and Kherson was being recognised in accordance with international law and "enshrined in the Charter of the UN". Earlier, the Biden administration said that it will impose sanctions on Russia as a result of the referendums. Meanwhile, European Union member states are also considering an eighth round of measures, including sanctions on anyone involved in the votes. Also condemning Russia's move, UN Secretary-General Antonio Guterres said that any annexation of a country's territory based on the use of force violates the UN Charter and international law, the BBC reported. It is a "dangerous escalation" that "has no place in the modern world", he said. In a phone call with Putin, Turkish President Recep Tayyip Erdogan also expressed his opposition to the plan and called on the Russian leader to reduce tension and give peace negotiations with Ukraine another chance. In his response to the "pseudo referendums", Ukraine's President Volodymyr Zelensky said: "Russia will not get a new territory of Ukraine. Russia will annex itself to the catastrophe that it has brought to the occupied territory of our country." Meanwhile, preparations for Putin's announcement were underway in Moscow, with a stage set up for a concert in Red Square, adorned with billboards proclaiming the four regions as part of Russia. This is a repeat of Russia's annexation of the southern Crimea Peninsular in 2014, which also followed a discredited referendum, says the BBC. The Crimean annexation has never been recognised by the the international community. Russia's two houses of parliament will however, formally ratify the move next week. /IANS