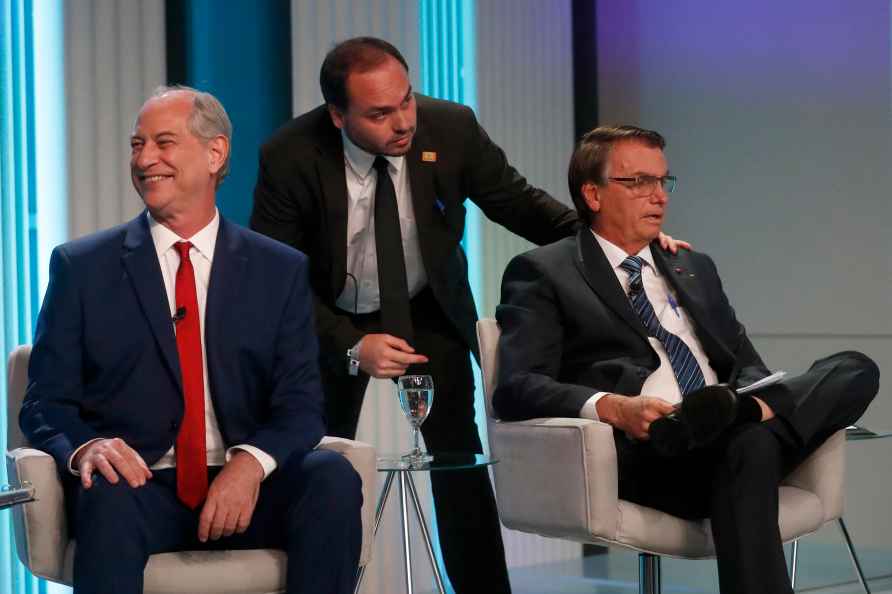 [Carlos Bolsonaro, son of Brazil's President Jair Bolsonaro who is running for re-election, talks to his father, next to the Presidential candidate Ciro Gomes of the Democratic Labour Party, during their arrival at the presidential debate in Rio de Janeiro, Brazil, Thursday, Sept. 29, 2022. Brazil will hold general elections on Oct. 2. /PTI] By Arul Louis United Nations, Sep 30 : US nominee Doreen Bogdan-Martin has become the first woman to head the UN's telecommunications organisation soundly defeating Russia's candidate in a contest that was a measure of their international popularity. Bogdan-Martin received 139 votes on Thursday at the International Telecommunications Union (ITU) high-level meeting in Bucharest to become its secretary-general succeeding China's Houlin Zhao next year. Russia's Rashid Ismailov received only 25 votes showing its growing international isolation. Bogdan-Martin will take the helm of the 157-year-old organisation that started as a telegraph group during the time of Morse Code-driven communication and today faces the complexities of fast-evolving communications technologies and the problem of the digital divide in a world where 2.7 billion are shut out of the digital domain. After her election, she said that she would make the ITU "even more agile, innovative and relevant, to help everyone, everywhere, embrace tomorrow's digital environment". Bogdan-Martin is the director of the ITU Telecommunication Development Bureau (BDT), having joined the organisation in 1994 and held several posts. The US invested a lot of diplomatic effort to get her elected. President Joe Biden personally endorsed her, saying, "She understands the importance of connecting every school to the internet and making sure every student can access virtual learning, providing women and girls the digital tools they need to succeed, and extending the benefits of online health and educational resources." Secretary of State Antony Blinken and US Permanent Representative Linda Thomas-Greenfield lobbied for her. Russia fielded a candidate with international experience working with Western companies hoping to use those links and play down his Moscow links. Ismailov worked with Nokia, Ericsson and Siemens as well as China's Huawei. Tomas Lamanauskas of Lithuania was elected deputy secretary general with 105 votes to the 59 received by Chaesub Lee of South Korea and 12 by Gisa Fuatai Purcell of Samoa. India was represented at the high-level meeting known as the Plenipotentiary Conference by Minister of State for Communications, Devusinh Chauhan. In his farewell speech Zhao announced that the ITU was setting up an Area Office and Innovation Centre in India to strengthen its regional presence. On Friday, more elections are to be held. India is running for a seat on the ITU Council and it has nominated Revathi Mannepalli, the senior deputy wireless advisor in the Department of Communications, for the ITU Radio Regulations Board. (Arul Louis can be contacted at aru.l@ians.in and followed at @arulouis) /IANS