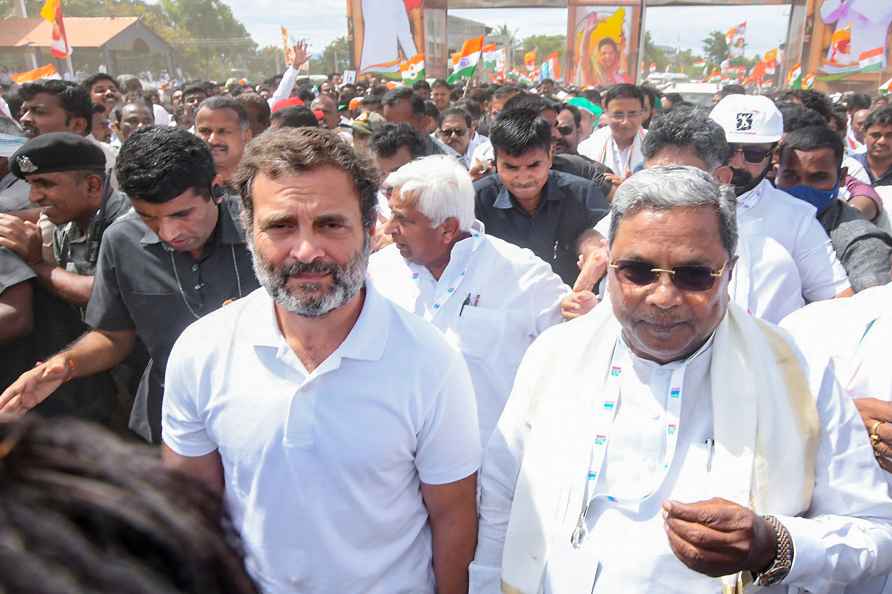 [Chamarajanagar: Congress leader Rahul Gandhi with party leaders during the party's Bharat Jodo Yatra, at Gundlupet in Chamarajanagar district, Friday, Sept. 30, 2022. ( /PTI] Chamarajanagar (Karnataka), Sep 30 : Opposition leader Siddaramaiah on Friday said that if the police officers join hands with BJP to trouble the Congress, they will be taught a befitting lesson in future. Addressing a massive convention at Gundlupet ahead of Bharat Jodo Yatra in the presence of Rahul Gandhi, Siddaramaiah said that the police officers should know that after six months, the Congress is going to form the government in Karnatakaand the BJP weeded out. He was referring to the incident of tearing down of flexes of Congress leaders put up to welcome Rahul Gandhi in the state. The Congress leader warned the state police department against joining hands with anyone to trouble Congress party leaders and workers. "Those police officers who join hands with ruling BJP will be dealt with strictly and taught a lesson," he warned. Hailing the Bharat jodo yatra, Siddaramaiah stated that since independence, no leader has taken up such an endeavour of covering the whole country through padayatra. He further stated that the Congress has the power to ensure that BJP leaders do not step out of Karnataka. "Let them be careful if they think Congress leaders could be troubled," he warned. The Congress leader also urged the people of the state to join Bharat Jodo Yatra and support Rahul Gandhi's fight against hatred and communal ideology of BJP. /IANS