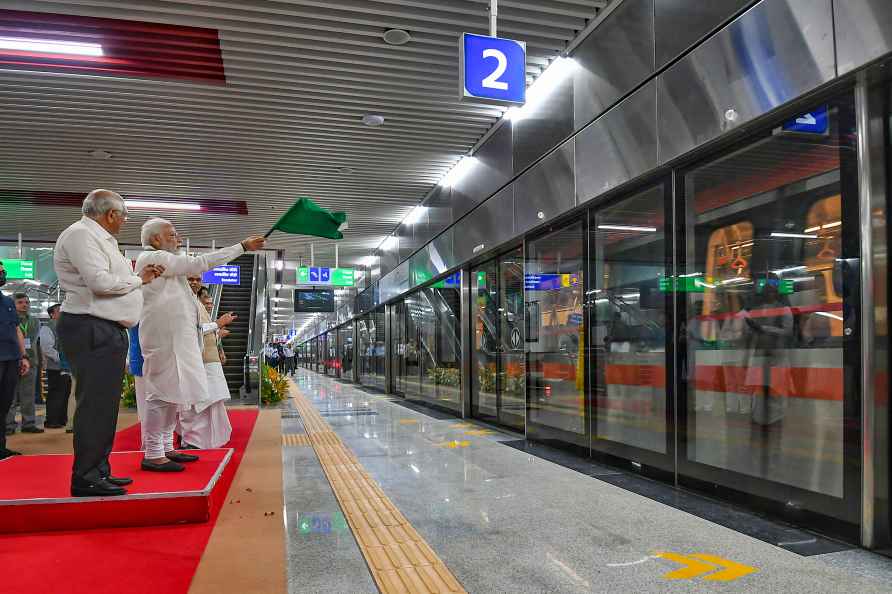 [**EDS: IMAGE VIA PIB** Ahmedabad: Prime Minister Narendra Modi flags off a metro during the inauguration of the phase-1 of Ahmedabad Metro rail project between Thaltej and Vastral, in Ahmedabad, Friday, Sept. 30, 2022. ( /PTI] Ahmedabad, Sep 30 : Prime Minister Narendra Modi said on Friday that soon Gujarat will turn into a model of twin cities and multi-model connectivity hub. On Friday morning, he flagged off the Vande-Bharat train from Gandhinagar and travelled to Ahmedabad by it. After getting down at Kalupur railway station in Ahmedabad, he flagged off the Ahmedabad Metro train phase one and got down at Doordarshan square in Western Ahmedabad to reach the public rally venue. "Ahmedabad-Gandhinagar has become good example of twin city, now this will be replicated in other parts of the state like Nadiad-Anand, Vadodara-Halol-Kalol, Bharuch-Ankleshwar, Surat-Navsari, Valsad-Vapi, Morbi-Vankaner and Mehsana-Kadi. These cities will have multi-model connectivity and urban basic facilities," he said while addressing a gathering in Ahmedabad. These twin cities and urban cities development and growth are going to be the parameters of a developed India in the next 25 years. He also appealed to the citizens to visit metro stations and other infrastructure to understand how infrastructure is developed, and how much public money is invested in it. Once they see it for themselves, they will never think of damaging public property, as they will get the feeling of owning it. Talking about metro trains and future plans, the Prime Minister said that at least in one dozen cities metro train projects are either completed or slated to get over soon. Vande Bharat's 75 trains are planned to run by next year. The Prime Minister lambasted the previous governments and said that whenever they thought about infrastructure they used to calculate costs, whereas his government thinks of improving the lives of people and boost trade and industries with promotion of infrastructure. Be it metro train or Vande Bharat or the Bullet train, this is all planned considering the global business demand. /IANS