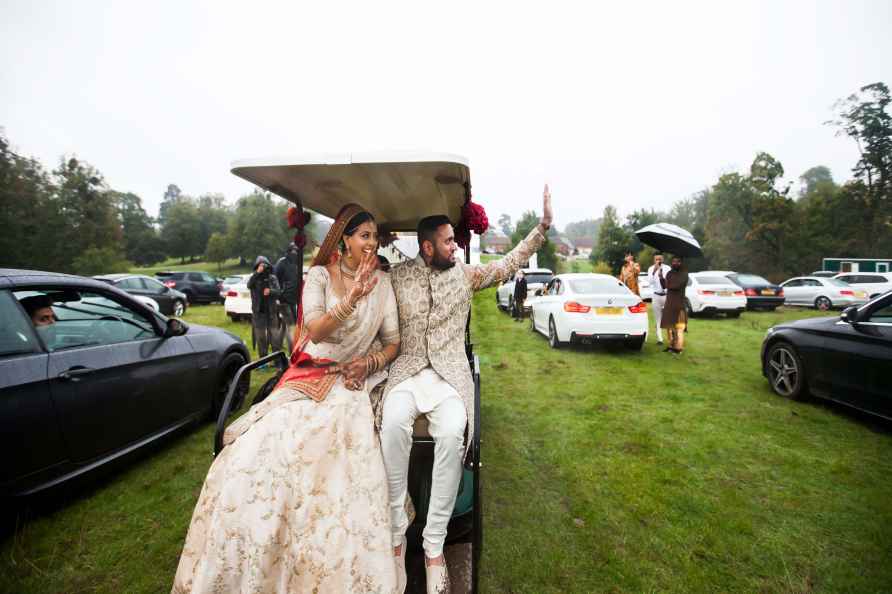 New Delhi, Sep 28 : The band, baajaa and baraat are ready as Richa Chadha and Ali Fazal are all set to tie the knot. But before that, the star couple, who have reached the capital, are hosting an intimate dinner gathering for their near and dear ones on Wednesday night. A source close to IANS gave details about the couple's plans for the night before their mehendi and sangeet ceremony on Thursday. The source said: "They reached Delhi on Wednesday morning. Tonight, there is a family get together, intimate gathering and dinner." The couple were earlier planning to host a reception for their guests in New Delhi's Gymkhana club. However, there is now a change in plan as they have found a beautiful venue in their close friend's big bungalow and sprawling lush lawns. The source gave details: "Gymkhana party has been moved to mid-October. To be precise for Ali's birthday on October 15. But they found a better venue. Their friend's lawn." The place has a nostalgia value as it's close to where she studied. The source added that the wedding celebrations would begin on Thursday afternoon. "Tomorrow is the sangeet and mehendi. It will start from early afternoon till night, which will be attended by families, close friends and youngsters." Actor Ali Fazal's family has also flown down from Lucknow and some relatives have come from Canada. On Friday, the to-be-married couple will host a cocktail party along with formal dinner. It will be followed by a DJ party. Around 150 people are expected including extended family, acquaintances, friends and close friends from Delhi. The two will get married in Mumbai on October 4. The wedding will take place in the afternoon at the the iconic The Great Eastern Home, a 176-year-old mill turned into a luxe event space in Byculla. The wedding will be attended by only 40-50 people. Only close friends and family of the actors, according to the source. In the evening, the reception will take place for their friends in the showbiz industry. /IANS

Sanjay Mishra is a fan of Ajay Devgn-starrer 'Drishyam'
Mumbai, Dec 5 : Actor Sanjay Mishra, who will be seen essaying the dark and menacing role of a killer in the upcoming theatrical movie 'Vadh', has an

Abhilash Thapliyal on how it was to portray a 'shabby', 'drunkard' in 'Faadu'
New Delhi, Dec 5 : Actor and host Abhilash Thapliyal will be seen in Ashwiny Iyer Tiwari's upcoming series 'Faadu'. He talked about playing Roxy in th