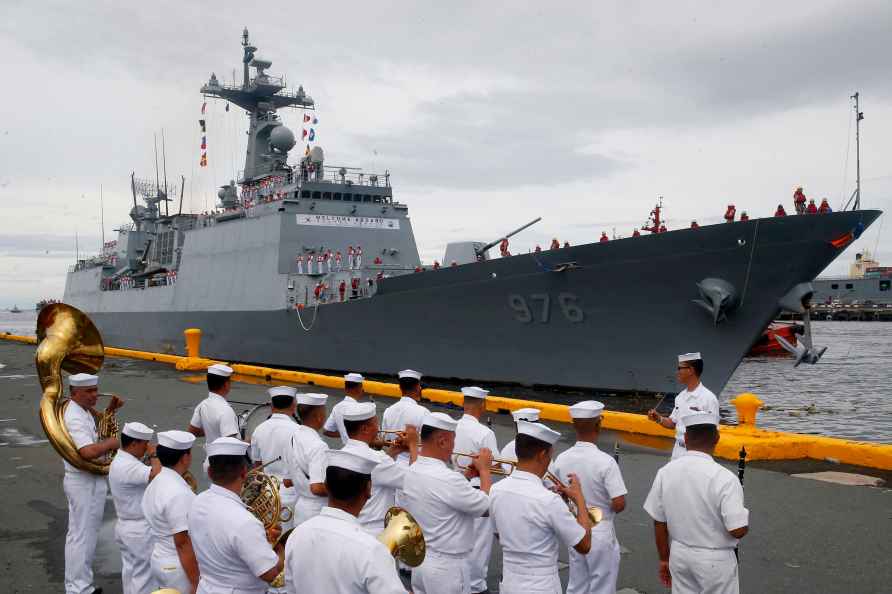 Chennai, Sep 28 : Two South Korean naval ships - ROKS Hansando and ROKS Daecheong - are on a friendly visit to Chennai from Wednesday to Saturday. A total of 470 sailors, including 164 final year cadets of Korean Naval Academy, are on board, said a statement from the South Korean Consulate General here. This is the third visit of ROKN Cruise Training Task Group to Chennai following their earlier visits in 2014 and 2015. The Korean Navy Cruise Training Task Group, led by Rear Admiral Kang Dong-goo, is formed as midshipmen training programme for the fourth year of Korean Naval Academy to foster their adaptability to real maritime environment. During their stay in Chennai, the Korean Navy will be part of various activities like Marina Beach clean up and the Korean Navy Brass Band will display a cultural performance to Indian audience at the Hindustan Institute of Technology and Science. The Korean ships were made in Korea with state-of-the-art technology. ROKS Hansando, commissioned in 2020, is Korea's first training ship with full capacity of 300 personnel. ROKS Daecheong, commissioned in 1997, is a multipurpose fast combat support ship capable of supplying ammunition, fuel, fresh water, and other logistic support to combat ships in naval operations. The Korean Naval Ships began their 110-day-long voyage on September 2 that will cover 9 countries and 10 ports around the Indo-Pacific region, including Vietnam, Malaysia, India, Indonesia, Papua New Guinea, Australia, New Zealand, Fiji, and the US. Their journey will strengthen ties and promote mutual understanding between Korea and the visiting countries. Chennai is the home of a 4,000 strong Korean community and around 200 Korean companies. /IANS

India, Australia joint military exercise begins from Monday
New Delhi, Nov 27 : The bilateral military training exercise between the contingents of the Indian Army and the Australian Army is scheduled to take p