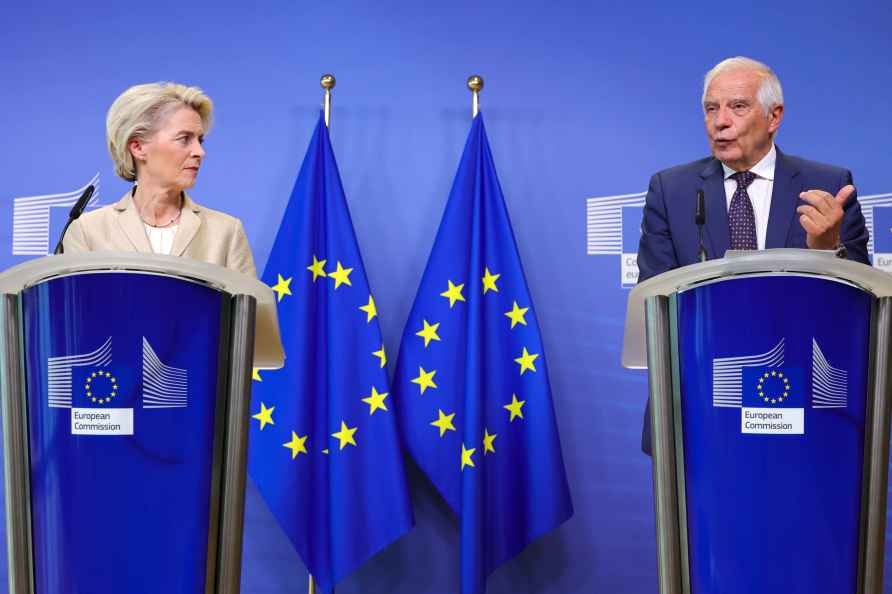 [European Commission President Ursula von der Leyen, left, and European Union foreign policy chief Josep Borrell address a media conference at EU headquarters in Brussels on Wednesday, Sept. 28, 2022. The European Union's top diplomat says the bloc suspects that damage to two underwater natural gas pipelines was sabotage and is warning of retaliation for any attack on Europe's energy networks. /PTI] Athens, Sep 28 : Greece has proposed the establishment of an 80-billion-euro ($76 billion) fund by the European Union (EU) to collectively deal with the impact of the spike in natural gas prices amid the ongoing energy crisis, the Environment and Energy Ministry said in a statement. Ahead of an emergency Council meeting of the EU Energy Ministers scheduled for this Friday in Brussels, Greek Environment and Energy Minister Kostas Skrekas has sent a letter to Frans Timmermans, executive vice president of the European Commission for the European Green Deal, and the bloc's Energy Commissioner Kadri Simson outlining the proposal, Xinhua news agency quoted the statement issued on Tuesday as saying. According to the Greek government, the fund should be supported by a special levy of 10 euros per thermal megawatt-hour (MWh) that should be imposed on European power producers for the amount of natural gas they use to produce electricity. The funds would be utilised to support vulnerable households and small and medium-sized enterprises and to finance investments in alternative fuels, like biomethane and green hydrogen. Furthermore, the special fund should support energy companies' emergency needs for system modifications as they try to replace Russian natural gas, as well as efforts to replace natural gas with other fuels, according to the letter. Greece estimates that the levy would generate nine billion euros annually across the EU, based on 2021 consumption figures. This sum could be combined with a low-interest loan of 80 billion euros provided by the European Investment Bank, which could be gradually paid off by the annual levy, according to the proposal. /IANS

Address supply chain shocks if you wish to rein in inflation: Analysts