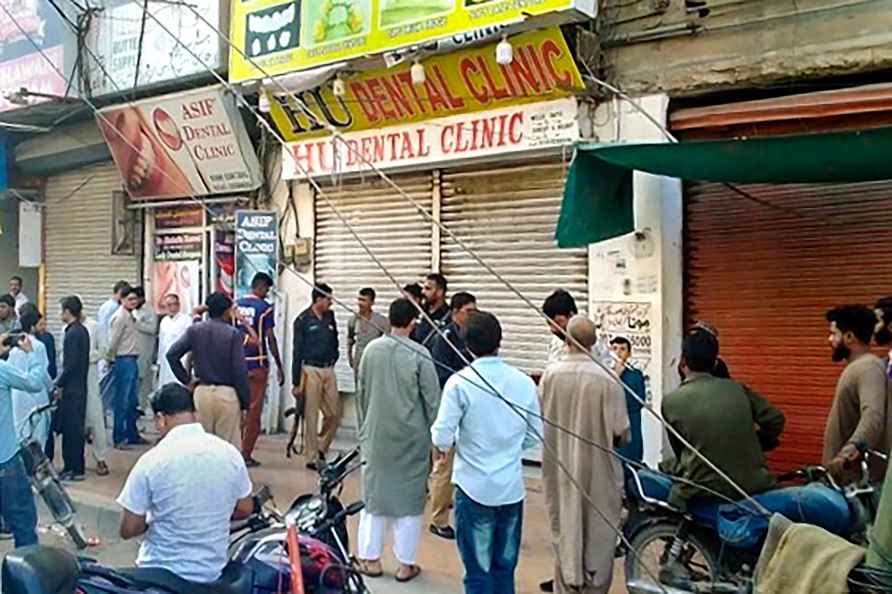 [Karachi: Locals gather at the site after unidentified gunmen opened fire inside a dental clinic in Pakistan's southern port city of Karachi, Wednesday, Sept. 28, 2022. A Chinese national was killed in the firing. ( /PTI] Karachi, Sep 28 : A Chinese national was shot dead and two others were injured on Wednesday after an unidentified assailant opened fire inside a dental clinic in Karachi's Saddar area, a police official said, the media reported. Speaking at the scene of the crime, SSP South Asad Raza told reporters that one person was killed and two persons were injured who were shifted to a hospital for treatment. He confirmed that the three were Chinese people, Dawn reported. According to the official, the assailant, in his early 30s, was clad in trouser and a blue shirt. He entered the clinic pretending to be a patient and opened fire, Raza told Dawn. In a press release issued afterwards, the police identified the victims as 25-year-old Ronil D Raimond Chaw, 72-year-old Margrade and 74-year-old Richard. It said that the victims had been running the dental clinic for a long period of time and didn't have any threat, Dawn reported. Police surgeon Dr Summaiya Syed said a man with bullet wounds was brought dead to the Dr Ruth Pfau Civil Hospital. Syed said that two others -- a man and a woman -- were taken to the Jinnah Post-Graduate Medical Centre in an injured state. The police surgeon said that the condition of both the injured foreigners was critical as they have suffered bullet wounds in their abdomen, Dawn reported. Meanwhile, Sindh Chief Minister Murad Ali Shah took notice of the killing, according to a spokesperson. The CM sought a detailed report from the Karachi Additional IGP. Shah also ordered the immediate arrest of the attackers and observed that such incidents were not tolerable, according to the official statement. This incident is the latest in the recent spate of attacks on Chinese nationals in the country. In April, three Chinese nationals were killed in a suicide attack outside the University of Karachi's (KU) Confucius Institute, Dawn reported. /IANS