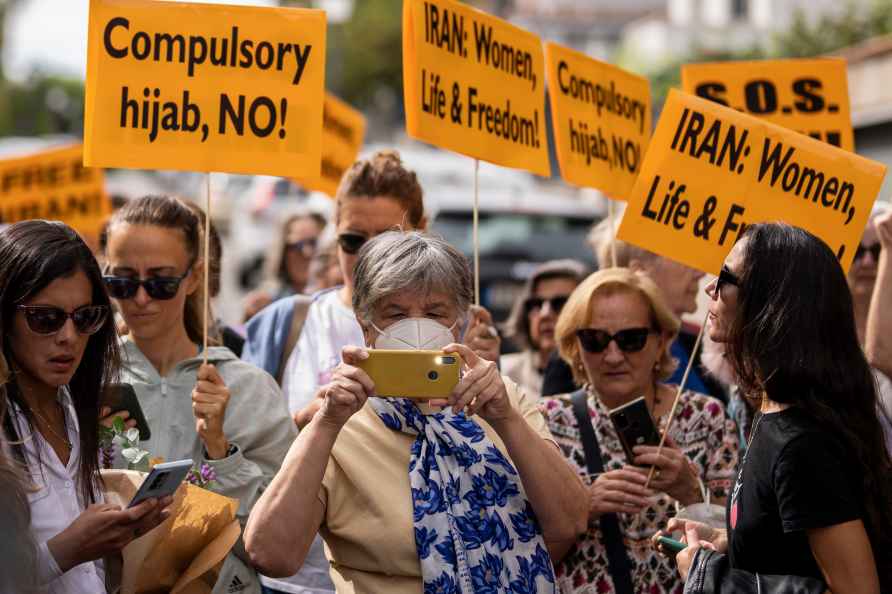 [Protesters gather during a protest against the death of Iranian Mahsa Amini, outside the Iranian Embassy in Madrid, Spain, Wednesday, Sept. 28, 2022. Amini, a 22-year-old woman who died in Iran while in police custody, was arrested by Iran's morality police for allegedly violating its strictly-enforced dress code. /PTI] New York, Sep 28 : In recent days Iran has seen deep public unrest, with demonstrations and protests taking place in some 80 cities, triggered by the tragic death of Mahsa Amini, who was detained by authorities in Tehran on September 13 and died, while in custody, three days later. In a statement on Wednesday, the New York-headquartered UN Women said that "it stands with the women of Iran in their rightful demands to protest injustice without reprisal, and to be free to exercise their bodily autonomy, including their choice of dress; and also supports them in seeking accountability, and the upholding of their basic human rights as stipulated in the Charter of the UN". "We call on relevant authorities to support and enable the expression of their full human rights in a safe environment without fear of violence, prosecution, or persecution. "We align with the remarks by the High Commissioner for Human Rights on the need to ensure the rights to due process and release for all women who have been arbitrarily detained and with the Special Procedures of the Human Rights Council, in the call for the Iranian authorities to hold an independent, impartial, and prompt investigation into Ms Amini's death, to make the findings of the investigation public and to hold all perpetrators accountable. "We reiterate our expression of condolences to the family of Mahsa Amini. We remain steadfast in upholding the rights of women and girls in every part of the world," the UN Women added. According to the Iran Human Rights (IHR), a Norway-based organisation, at least 76 protesters have been killed by Iranian security forces in the 11 days of unrest across the country against Amini's death. The organisation also said that hundreds of people have also been arrested, including 20 journalists. The anti-government demonstrations have spread to more than 80 cities and towns across Iran since Amini's funeral on September 17. /IANS