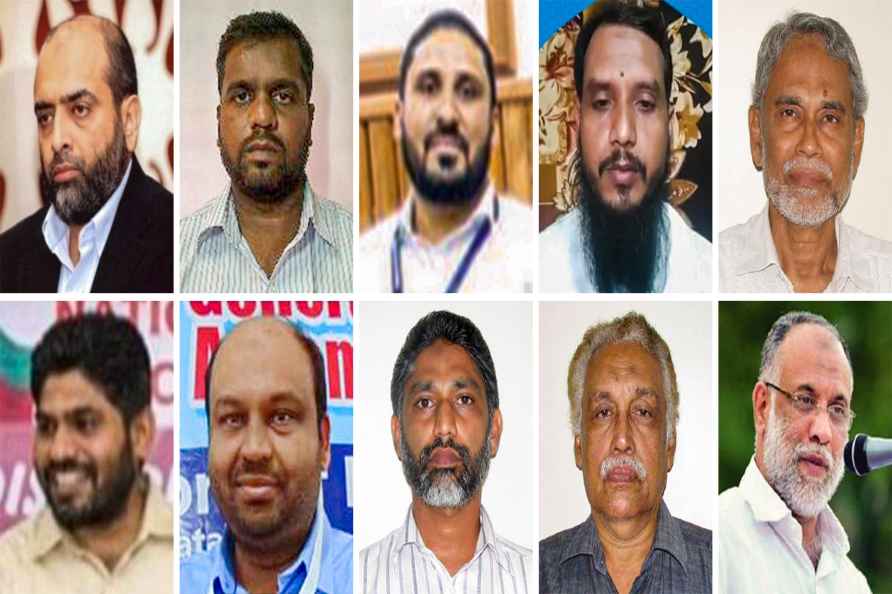 [**EDS: COMBO IMAGE** New Delhi: In this combo image; Popular Front of India's (PFI) (clockwise from top left) NEC member Abdul Wahid Sait, National Secretary Afsar Pasha, National General Secretary Anis Ahmed, West Bengal President and Empower India Foundation Liason Officer Minarul Sheikh, National Vice Chairman Em Abdur Rahiman, National Secretary VP Nazarudeen Elamaram, National Executive Council member and NCHRO National General Secretary P Koya, Chairman Oma Salam, National Secretary and Media & Public Relations In-charge Mohammed Shakib and Rajasthan President Mohammed Asif, who have been arrested during nationwide raids. The Centre has banned PFI under the stringent provisions of the Unlawful Activities (Prevention) Act. ( /PTI] Thiruvananthapuram, Sep 28 : The Kerala unit of the BJP on Wednesday demanded that Chief Minister Pinarayi Vijayan should ask for the resignation of State Ports Minister Ahamed Devarkovil as he belongs to the Indian National League (INL), which has close relations with the now banned Rehab India Foundation (RIF). Rehab India Foundation (RIF) is one of the associates of Popular Front of India (PFI) and have been banned by the Centre for five years. "In exercise of the powers conferred by sub-section (1) of section 3 of the Unlawful Activities (Prevention) Act, 1967 (37 of 1967), the Central Government hereby declares the Popular Front of India (PFI) and its associates or affiliates or fronts including Rehab India Foundation (RIF), Campus Front of India (CFI), All India Imams Council (AIIC), National Confederation of Human Rights Organization (NCHRO), National Women's Front, Junior Front, Empower India Foundation and Rehab Foundation, Kerala as an 'unlawful association'," read a notification issued by the Union Ministry of Home Affairs. Surendran told the media that Vijayan should boot out the Left ally, Indian National League (INL) from the Left Democratic Front. "Mohammed Suleiman, who is part of RIF, is also part of the INL and, hence Vijayan, if he has any concern for our country, should immediately ask the Minister to resign and throw out the INL," said Surendran. Meanwhile, top INL leader Kassim Irikoor denied all the allegations levelled by Surendran. "The baseless allegations levelled by Surendran are nothing but political nonsense. The RIF is something which was floated in Delhi and as a responsible INL leader, I categorically state that there are no relations with RIF and INL," said Irikoor. The ban comes after the recent raids carried out at the premises of PFI members by the National Investigation Agency and Enforcement Directorate. On September 22, teams led by the NIA and Enforcement Directorate arrested 106 leaders and activists of the PFI in nearly 15 states. CPI-M state secretary M.V. Govindan said the Central Committee of the CPI-M will soon come out with the response. "Just by banning one organisation won't be helpful," said Govindan. Leader of Opposition V.D. Satheesan also aired similar views and also said, "the RSS is one organisation which is out to destroy peace," and the Congress party has nothing to do with such organisations. However, all eyes are on how things will be for SDPI -- the political wing of the PFI -- as its name is not included in the banned list. Both, the Congress and the CPI-M, will have to tread cautiously as the PFI in Kerala has a huge vote bank. /IANS