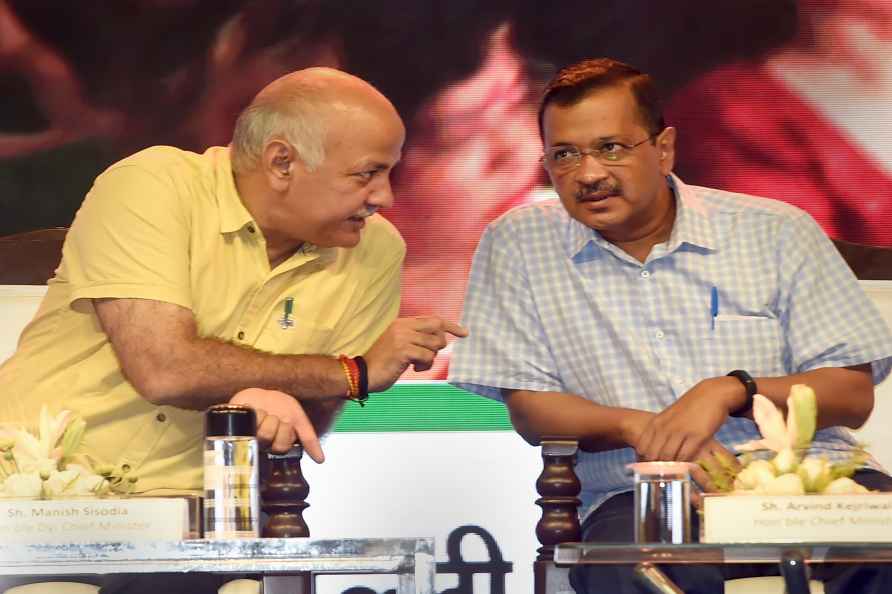 [New Delhi: Delhi Chief Minister Arvind Kejriwal with Deputy CM Manish Sisodia during an interaction with students and teachers of the Delhi govt schools, on the occasion of the 1st anniversary of 'Deshbhakti Curriculum', at Thyagraj Stadium in New Delhi, Wednesday, Sept. 28, 2022. ( /PTI] New Delhi, Sep 28 : A day after the probe agency CBI arrested Vijay Nair in connection with the alleged corruption in Delhi's liquor policy, party chief Arvind Kejriwal on Wednesday said that he was a mere party worker. "They arrested Vijay Nair yesterday. I fail to understand why they have arrested him. He is just a small party worker. He handles communication for us. Earlier, he handled the communication work in Punjab and we formed the government there. Now, he is handling the communication strategy in Gujarat. He was handling social media outreach in Gujarat", said Delhi Chief Minister Arvind Kejriwal while addressing the media here on Wednesday. Kejriwal alleged that Nair was forced to take the name of Deputy CM Manish Sisodia. "Over the past few days, he was being called for questioning every day. He was being pressured to name Manish Sisodia, and threatened with arrest if he did not name him. Earlier, they raided Manish Sisodia, examined the locker and found nothing. They are trying to crush the AAP", Kejriwal alleged. The government's first duty should be to liberate the people from inflation and unemployment, but the government is not interested in solving the problems being faced by the common man, said Kejriwal. "People from across the country are suffering because of price rise and inflation. Everything is expensive, there is joblessness and businesses are shutting down. At a time like this, it is the biggest job of any government to find solutions. But they don't care. They only want to indulge in dirty politics. They are only looking for ways to finish AAP, to crush Kejriwal and AAP," he said. He added further that Manish Sisodia too can be arrested in the next one week. But it will not have any impact on AAP party workers. "If they can arrest a small party worker like Nair, they can arrest anyone. Today I appeal to all AAP workers across the county to be ready for arrest", the chief minister said. /IANS