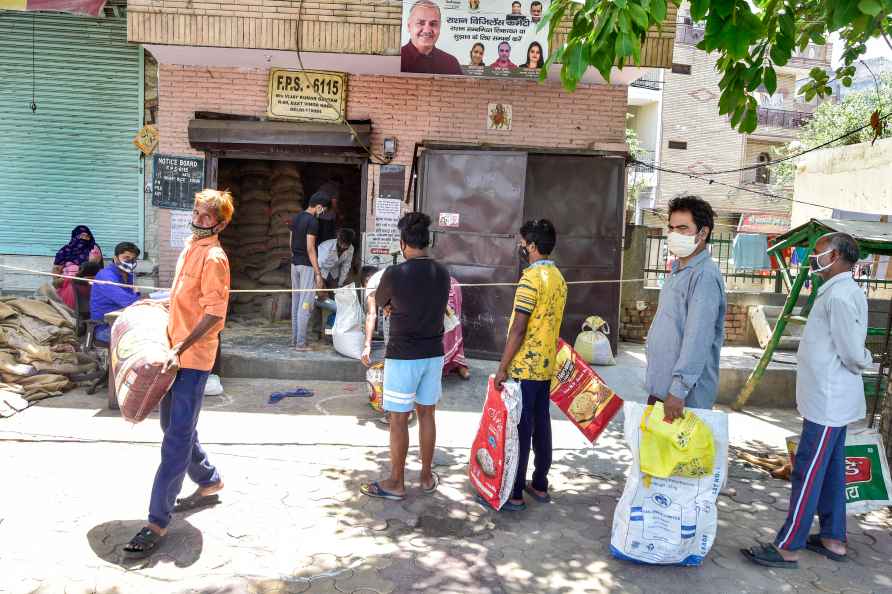 [**EDS: FILE PHOTO** New Delhi: In this Thursday, May 27, 2021, file photo, a man carries a bag of free ration provided by the central government as others wait in a queue, at a Fair Price Shop in East Delhi. The government on Wednesday, Sept. 28, 2022, extended by three months its programme to provide free rations to the poor under the Pradhan Mantri Garib Kalyan Anna Yojana (PMGKAY). ( /PTI] New Delhi, Sep 28 : The government on Thursday extended the Pradhan Mantri Garib Kalyan Anna Yojana for a period of three months, from October 1 till December 31. The decision was taken in the meeting of the Union Cabinet held earlier in the day. The scheme was coming to an end on September 30, after it had been extended in March 2022 for a period of six months more. A total of 122 lakh metric tonnes of food grains would be distributed during this period, Minister for Information and Broadcasting Anurag Thakur told media persons. More than 80 crore beneficiaries would benefit from the allocation of food grains till December 2022, official sources said. In the previous seven stages of the scheme, starting from April 2020 till September 30, 2022, Rs 3.91 lakh crore have been spent and 1,121 lakh metric tonnes of food grains distributed. "We distributed free food grains during the pandemic to ensure that nobody died due to hunger and are also doing so now during the festival season," Thakur said. On the issue of whether the government had adequate stock of wheat and rice for distribution under the scheme, the minister said that it was the government's responsibility to look at the welfare of the poor. Under this scheme, 5 kg ration per person is given to beneficiaries. This is in addition to the ration given under the public distribution system. /IANS