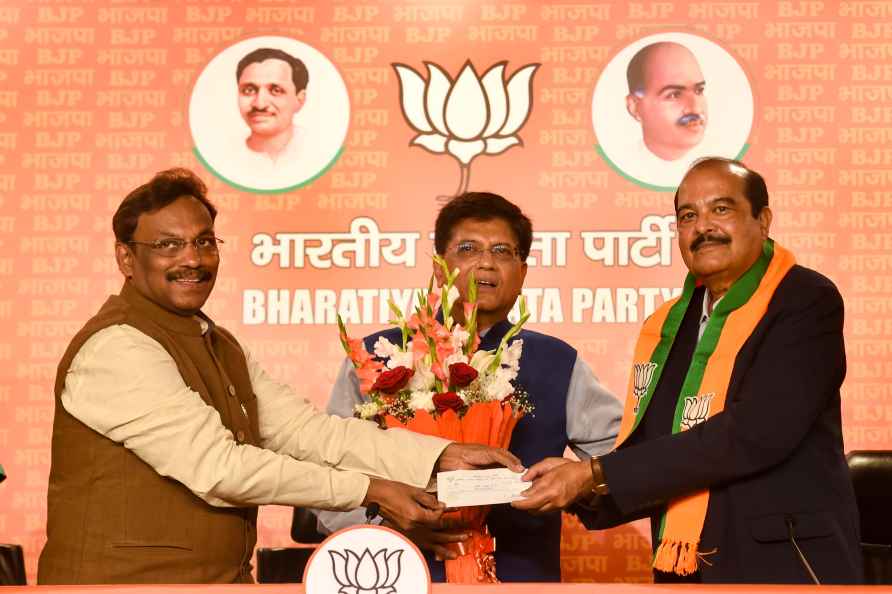 [New Delhi: Himachal Pradesh Congress leader Harsh Mahajan joins Bharatiya Janata Party (BJP) in the presence of Union Minister Piyush Goyal, in New Delhi, Wednesday, Sept. 28, 2022. ( /PTI] New Delhi, Sep 28 : In a major jolt to the Congress in Himachal Pradesh in the run up to the Assembly polls, party's working president Harsh Mahajan on Wednesday joined the BJP in the national capital, amid an ongoing crisis in the party's government in Rajasthan. The three-time legislator Mahajan was once a close aide of Congress veteran and six-time Chief Minister late Virbhadra Singh. He hails from Chamba and has a mass clout in the state and in the previous Virbhadra Singh-led Congress government in the state he was the Chairman of the Himachal Pradesh State Cooperative Bank Ltd. Mahajan's family was dedicated to the Congress for the past 60 years. His father, Desh Raj Mahajan, was a four-time legislator, who served as a speaker and minister in Himachal Pradesh. He joined BJP in Delhi in the presence of Union Commerce and Industries Piyush Goyal and party President J.P. Nadda, among other leaders. State BJP general secretary Suresh Kashyap said Mahajan, who belonged to Chamba district, has joined the party after getting inspired with the visionary leadership of Prime Minister Narendra Modi and policies of the party. Mahajan was a long serving Youth Congress leader and had won elections thrice from the Chamba Assembly segment but got disillusioned with Congress leadership. The Congress has no leadership or policy or vision for the welfare of the state or country which is the reason that many party leaders were deserting the party, he said after joining the saffron party. Mahajan was at the helm of the Congress in both organisational and in ministerial positions for the past four decades, and having been president of the State Youth Congress for nine years, the longest serving president till date. "I fought and won three consecutive terms in the state Vidhan Sabha elections and served as a cabinet minister and parliamentary secretary for 10 years. It was a matter of honour for me to have been a close aide and confidante of Virbhadra Singh. He entrusted me with the conduct of his personal and state election campaigns from 2009 onwards, Mahajan said in a statement. "At the national level, the Congress stands directionless and lacking in vision, faced with a crisis of leadership, tainted by sycophancy and corruption. This has translated into a diminishing of its numbers, with some of the tallest leaders and stalwarts of the grand old party being compelled to leave its ranks despite years of dedicated service to the organisation." Mahajan said Rahul Gandhi has proved to be lacking in both acumen and maturity. "Since the party continues to be a family fiefdom, the party today stands fossilised and lacks credibility. There is no connect with the pulse of India, and the party, shamefully, lacks a cadre which it used to have. Many of those that remain in the organisation today, lack a base, being mere nominated figure heads with dubious roles," the Congress rebel added. BJP-ruled Himachal Pradesh is likely to go to the polls for 68-member Assembly in November. /IANS