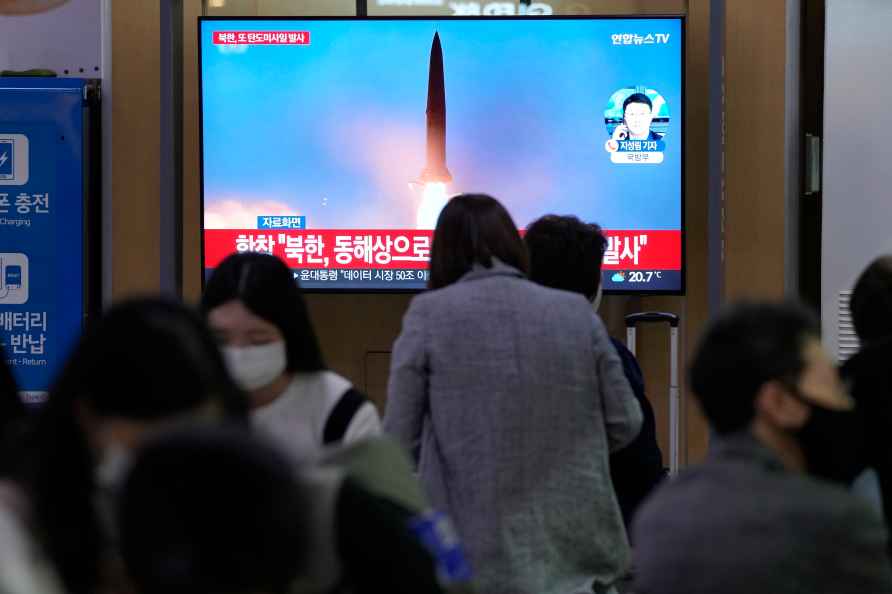 [Seoul: A TV screen shows a file image of a North Korean missile launch during a news program at the Seoul Railway Station in Seoul, South Korea, Wednesday, Sept. 28, 2022. North Korea fired a ballistic missile toward its eastern waters on Wednesday, South Korea's military said, a day before U.S. Vice President Kamala Harris is to visit the South. /PTI] Seoul, Sep 28 : South Korea seeks to significantly boost production of electric vehicles to more than double domestic carmakers' global market share to 12 per cent by 2030 and to be a global car industry powerhouse, the industry ministry said on Wednesday. For the goal, the government vowed to provide tax incentives and various supportive measures to promote carmakers' investment worth about a combined 95 trillion won ($66.03 billion) by 2026, according to the Ministry of Trade, Industry and Energy. The comprehensive road map was announced during a meeting presided over by Industry Minister Lee Chang-yang and attended by senior officials of major carmakers and related firms, including Hyundai Motor, Kia, GM Korea and major wireless carrier KT Corp, reports Yonhap news agency. Under the plan, South Korean carmakers plan to boost their global production of EVs to a combined 3.3 million units by 2030 from around 254,000 units logged last year so as to account for 12 percent of the world's EV market. Their market share came to 5 percent as of 2021. To achieve the target, they vowed to develop key software for EVs with their own technologies by 2026 and nurture 30,000 personnel with expertise in the future car sector, as well as 300 companies specialized in the development of automotive software by 2030, according to the ministry. As for automotive semiconductors, the country aims to make processors, sensors and other major parts to double its global market share to 6.6 percent by 2030, the ministry said, adding the development of highly competitive electric and hydrogen vehicles was also among its plans. To ensure a "fast but smooth transition" of the industry, the government vowed to support car part manufacturers' efforts to diversify their business portfolios. It will enhance monitoring of the supply and demand situation of key industry items that the country heavily relies on imports for and boost their reserves to guard against any unexpected global supply disruptions. /IANS