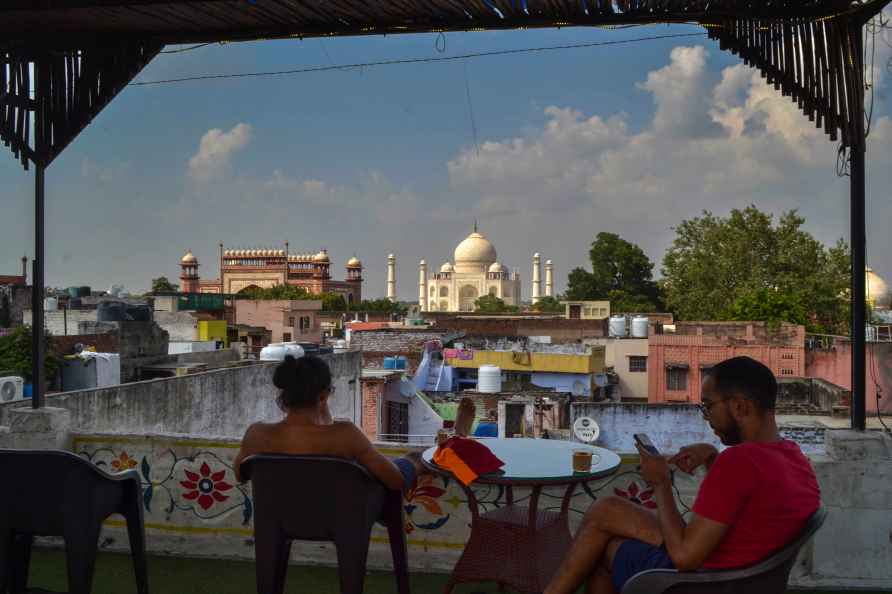 [Agra: Tourists at a restaurant in the backdrop of the Taj Mahal, in Agra, Wednesday, Sept. 28, 2022. Supreme Court has directed Agra Development Authority (ADA) to stop all commercial activities within a 500-metre radius of the UNESCO World Heritage Site. ( /PTI] By Brij Khandelwal Agra, Sep 28 : A Supreme Court order to stop commercial activities within 500 metres of the Taj Mahal has triggered a huge controversy that could create tension and uncertainty affecting the revival of tourism in the post-pandemic era. The apex court has directed the Agra Development Authority (ADA) to stop all business activities within 500 metres from the periphery of the World Heritage Site. The order came while disposing of a petition by a group of shopkeepers who had been shifted from their original location to a new site close to the parking area. They complained that while they had moved out, a large number were still continuing commercial activities in the restricted area. The order is likely to affect at least 500 shops, handicraft outlets, restaurants, hotels in the Taj Ganj locality. A rough estimate suggests around 50,000 people could be rendered jobless. Sources said the affected people were contemplating on moving a review petition in the apex court, while politicians were also being contacted. But a BJP MLA said the party could do nothing as the matter was before the apex court. Meanwhile, the ADA has started a survey and listing of establishments in the 500-metre zone. Clearly, there is lack of unanimity at the local level. Green activists pointed out that in December 1996, the Justice Kuldip Singh bench of the Supreme Court had ordered the closure of all polluting industries in the Taj Trapezium Zone. Industries that agreed to switch over to natural gas were however spared later. This action followed acceptance of the high powered Dr S. Vardharajan Committee report that had made a number of suggestions to contain high pollution level in the 10,000 sq.km eco-sensitive Trapezium Zone. The Taj Ganj market, and the shops on the eastern, southern and western gates of the monument carried on with commercial activities. Vehicles had to be permitted though there is a ban on movement of petroleum based automobiles. "The whole area is congested, stinking and full of people who are accused of fleecing tourists. Unauthorised or freelance guides are called Lapkas in the local lingo," a tourist guide said. The 'Catch 22' situation is not easy to resolve. If the apex court goes by the 1996 precedent, then there should be no hope for relief, but if the Uttar Pradesh government takes up the case and is able to persuade the apex court of the grim implications of the order, some relief may be forthcoming, a senior advocate said. The 17th century monument of love is annually visited by more than seven million tourists and is India's star tourist attraction. Lakhs of local people earn their living from tourism. /IANS