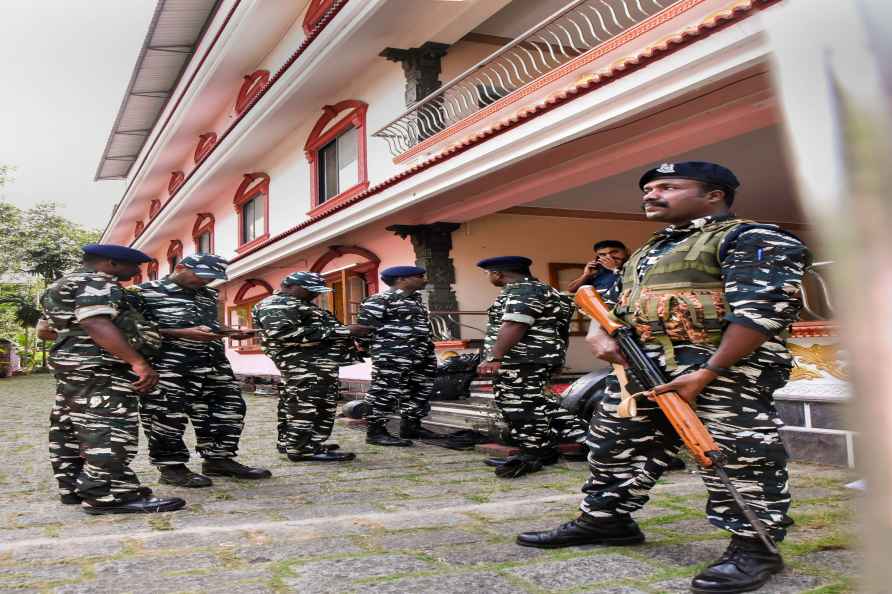 [Kochi: Army personnel stand guard outside RSS office in Kochi, Wednesday, Sept. 28, 2022. The Union government on Wednesday banned the PFI and several of its associates for five years under a stringent anti-terror law. ( /PTI] New Delhi, Sep 28 : The Centre on Wednesday banned the Popular Front of India (PFI) and its associates and affiliates for a period of five years in the wake of nationwide raids against the Islamist organisation by law enforcement agencies. "In exercise of the powers conferred by sub-section (1) of section 3 of the Unlawful Activities (Prevention) Act, 1967 (37 of 1967), the Central Government hereby declares the Popular Front of India (PFI) and its associates or affiliates or fronts including Rehab India Foundation (RIF), Campus Front of India (CFI), All India Imams Council (AIIC), National Confederation of Human Rights Organization (NCHRO), National Women's Front, Junior Front, Empower India Foundation and Rehab Foundation, Kerala as an 'unlawful association'," read a notification issued by the Union Ministry of Home Affairs. "Whereas, the Central Government, having regard to the above circumstances, is of firm opinion that it is necessary to declare the PFI and its associates or affiliates or fronts as an unlawful association with immediate effect, and accordingly, in exercise of the powers conferred by the proviso to sub-section (3) of section 3 of the said Act, the Central government hereby directs that this notification shall, subject to any order that may be made under section 4 of the said Act, have effect for a period of five years from the date of its publication in the Official Gazette," it added. As per the notification, the PFI is involved in several criminal and terror cases and shows sheer disrespect towards the constitutional authority of the country and with funds and ideological support from outside, it has become a major threat to internal security of the country. "Investigations in various cases have revealed that the PFI and its cadres have been repeatedly engaging in violent and subversive acts. Criminal violent acts carried out by PFI include chopping off limb of a college professor, cold blooded killings of persons associated with organisations espousing other faiths, obtaining explosives to target prominent people and places and destruction of public property," it added. The ban comes after the recent raids carried out at the premises of PFI members by the National Investigation Agency and Enforcement Directorate. On September 22, teams led by the NI) arrested 106 leaders and activists of the PFI in nearly 15 states. /IANS