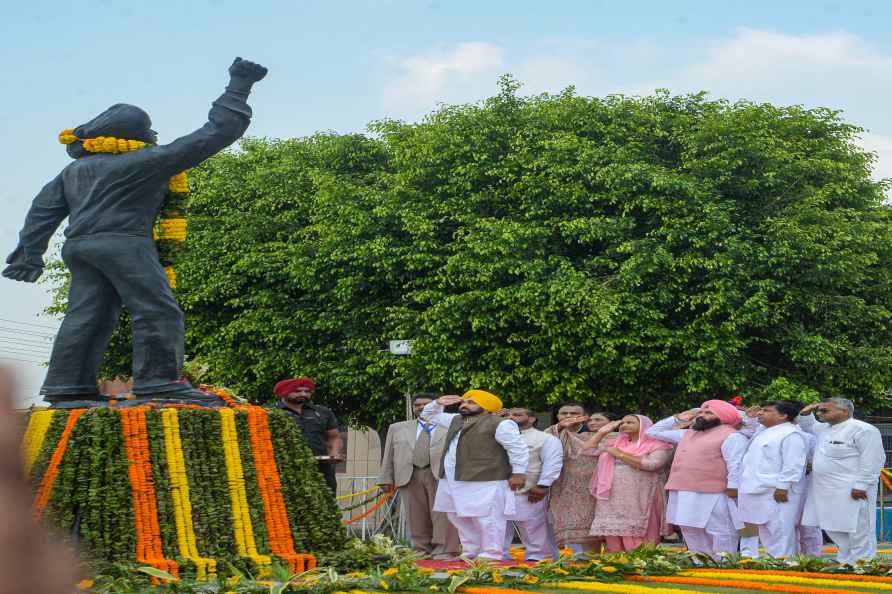 [Jalandhar: Punjab Chief Minister Bhagwant Mann pays tribute to Shaheed Bhagat Singh on his birth anniversary, at his village Khatkar Kalan near Jalandhar, Wednesday, Sept. 28, 2022. ( /PTI] Chandigarh, Sep 28 : Punjab Chief Minister Bhagwant Mann on Wednesday urged Centre to start more international fights from Shaheed Bhagat Singh International Airport in Chandigarh to facilitate the Punjabi diaspora across the globe. The Chief Minister, while addressing a function to rename the airport here, urged Union Finance Minister Nirmala Sitharaman to flag this issue with the Prime Minister and her counterpart in Civil Aviation. He said today is the 115th birth anniversary of Shaheed Bhagat Singh and this day has been made memorable with the decision to name airport after the legendary martyr. Mann said the Union government must start more flights from this airport. The Chief Minister said that Punjab diaspora from across the globe has been demanding suchA flights to ensure air connectivity from the state to Canada, the US, Australia and other parts of the world. He said besides commuters from Punjab, these flights will also benefit the travellers from Haryana, Himachal Pradesh, Uttarakhand, Jammu-Kashmir and other states. Mann said the state government has made concerted efforts for renaming this airport after name of Shaheed Bhagat Singh. The Chief Minister profusely thanked the Union government for naming the airport after Shaheed-e-Azam Bhagat Singh. He said that a long-pending demand of the country has been accepted. Paying floral tributes to Shaheed Bhagat Singh, he said that the young martyr is remembered not only for his heroism but also for his philosophy of socialism and fight against injustice. Earlier, the Union Finance Minister accompanied by Governor Punjab Banwari Lal Purohit, Haryana Governor Bandaru Dattatreya, Chief Minister Bhagwant Mann, Union Minister General (retired) V.K. Singh, Member Parliament Kirron Kher, Haryana Deputy Chief Minister Dushyant Chautala and Haryana Minister Anil Vij unveiled the plaque to name the airport after Shaheed Bhagat Singh. /IANS

By Arun Lakshman Thiruvananthapuram, Nov 27 : The term 'love jihad' is inseparable from Kerala as the state which is considered to be 'God's Own Country' because of its scenic and natural beauty, h […]