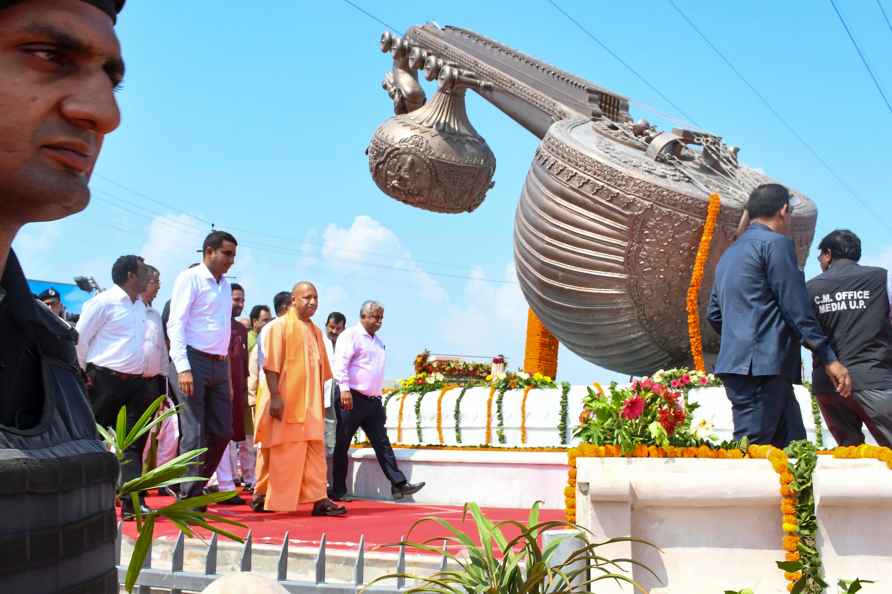 [Ayodhya: Uttar Pradesh Chief Minister Yogi Adityanath with Union Tourism Minister G Kishan Reddy and others at inauguration of the intersection named 'Lata Mangeshkar Chowk' on the 93rd birth anniversary of the legendary singer, in Ayodhya, Wednesday, Sept. 28, 2022. ( /PTI] Ayodhya, Sep 28 : Uttar Pradesh Chief Minister Yogi Adityanath on Wednesday inaugurated the newly-constructed Lata Mangeshkar Chowk in Ayodhya on the occasion of the late singer's 93rd birth anniversary. Paying tributes, Yogi said: "Sanatan Dharma means paying tributes to the one who gave all her life to India's music and culture. She has sung maximum bhajans in praise of Lord Ram. Her patriotic songs were also unparalleled and are memorable. This tribute has been inspired by Prime Minister Narendra Modi." The Chief Minister said that Ayodhya was on its way to becoming one of the most beautiful cities of the world. "The Ram temple is on its way to completion and people will not have to wait for long for it," he said. Earlier in the day, Prime Minister Modi paid tributes to iconic singer, saying the in Ayodhya named after her will be a fitting tribute to her. "Remembering Lata Didi on her birth anniversary. There is so much that I recall... the innumerable interactions in which she would shower so much affection. I am glad that today, a Chowk in Ayodhya will be named after her. It is a fitting tribute to one of the greatest Indian icons." Lata Mangeshkar's nephew Adinath Mangeshkar represented the singer's family at the inauguration ceremony. Lata Chowk has a 40-foot veena, a musical instrument associated with Goddess Saraswati, weighing 14 tonnes that has been installed in Ayodhya as a tribute to legendary singer. Ram Sutar, who designed the Veena, also attended the ceremony. Union Tourism Minister G. Kishan Reddy was also be present at the event to which religious and political leaders had been invited. Later, a cultural event was organized at the Ram Katha Park and an exhibition based on the life of the singer was also on display. Lata Mangeshkar, born in 1929, died at a Mumbai hospital on February 6 this year. She won three National Awards for Best Female Playback Singer. /IANS