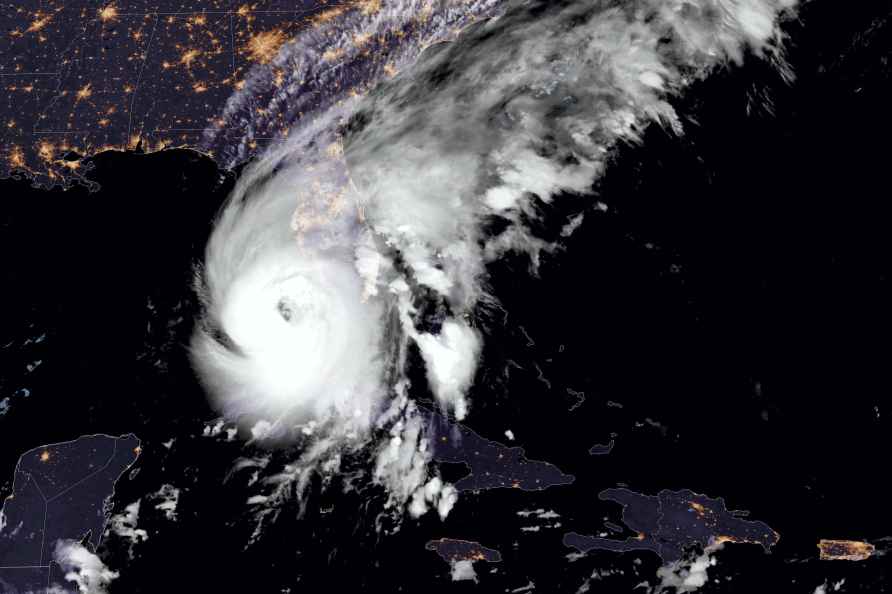 [NOAA: This GOES-East GeoCcolor satellite image taken at 12:41 a.m. EDT on Wednesday, Sept. 28, 2022, and provided by the National Oceanic and Atmospheric Administration (NOAA), shows Hurricane Ian over the Gulf of Mexico. Cuba remained in the dark early Wednesday after Hurricane Ian knocked out its power grid and devastated some of the country?Äôs most important tobacco farms when it hit the island?Äôs western tip as a major storm. /PTI] Washington, Sep 28 : A hurricane warning has been extended southward on the west coast of the southeastern US state of Florida to Chokoloskee, forecasters said. The US National Hurricane Center updated in a public advisor on Tuesday evening that Hurricane Ian was nearly 85 km south-southwest of the Dry Tortugas, a US national park made up of a series of islands. The Category 3 hurricane, which has maximum sustained winds of 195 km per hour, is expected to bring life-threatening storm surges, catastrophic winds, and flooding to the Florida Peninsula, Xinhua news agency reported. The centre of storm is forecast to move over the southeastern Gulf of Mexico on Tuesday, pass west of the Florida Keys later in the day, and approach the west coast of Florida within the hurricane warning area on Wednesday. More than 2.5 million people in Florida are now under some type of evacuation order, Governor Ron DeSantis told reporters on Tuesday evening. At least 1.75 million people are under mandatory evacuation orders, according to a tally by CNN of local city and county governments. US President Joe Biden said at the White House on Tuesday afternoon that Florida is now preparing for Hurricane Ian to make landfall. "Forecasts can change, but for now, the experts say this could be a very severe hurricane, life-threatening and devastating in its impact," Biden warned. The latest predicted path of the hurricane shows that "it may land a little further south than first anticipated," Tampa Mayor Jane Castor said at a news conference on Tuesday. The Federal Emergency Management Agency has deployed 700 personnel to Florida, and DeSantis has activated 5,000 state National Guard members, with another 2,000 coming from other states, according to the White House. Universal Orlando Resort theme parks and CityWalk in Orlando, Florida, will be closed on Wednesday and Thursday due to the hurricane, the company tweeted on Tuesday. Disney said its theme parks in Orlando will also be closed ahead of the storm. The commander of the US 4th Fleet, headquartered at Naval Station Mayport in Jacksonville, Florida, has ordered all ships and aircraft to make preparations for Hurricane Ian's expected arrival, according to a statement. Ships began departures from Naval Station Mayport on Tuesday and will complete heavy weather mooring if required to stay in port. And aircraft will initiate evacuations from area airfields or be secured in hangars rated to withstand hurricane force winds. Four ships and multiple rotary and fixed-wing aircraft are expected to relocate and remain out of the local area until it is determined safe to return, the US 4th Fleet said. The Edison Electric Institute, an association that represents all US investor-owned electric companies, said on Tuesday that electric companies in Florida and the southeastern part of the US have activated their emergency response plans. "They are prepositioning crews and equipment to be ready to respond to any power outages quickly and as soon as it is safe to do so," the association said in a statement. "More than 30,000 workers from at least 23 states already are mobilising to support the response." The storm system comes a week after Hurricane Fiona hit Puerto Rico, bringing heavy rainfall and flash flooding to the US territory while cutting power to the entire islands. More than 460,000 customers were still out of power in Puerto Rico as of Tuesday afternoon, according to an online tracker. /IANS

Etawah, Nov 28 : Passengers at the Etawah railway station were surprised when they heard an unusual announcement from the public address system of the enquiry office. The announcement system sou […]

UP: Elephant tramples farmer to death

Lakhimpur Kheri, Nov 28 : A 65-year-old farmer was attacked and killed by a wild elephant in Uttar Pradesh's Lakhipur Kheri district. Ram Bharose was attacked by the elephant in his field under […]