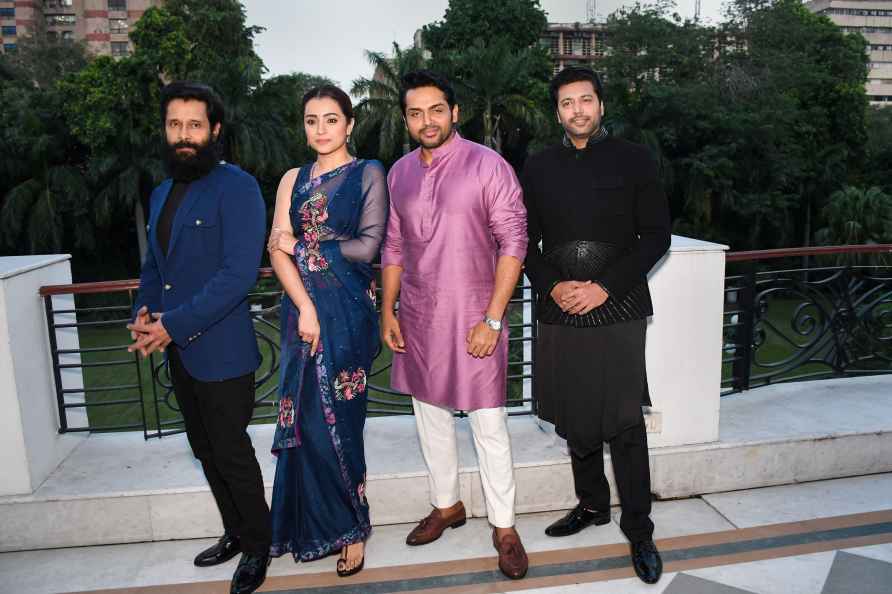 [New Delhi: Tamil film actors Vikram, Trisha Krishnan, Karthi Sivakumar and Jayam Ravi pose for photographs during a promotional event for their upcoming film 'Ponniyin Selvan: I', in New Delhi, Tuesday, Sept. 27, 2022. ( /PTI] New Delhi, Sep 27 : Chiyaan Vikram, who was in the national capital to promote his film 'Ponniyan Selvan I', talked about sharing screen space with Bollywood star Aishwarya Rai Bachchan again after 'Raavanan' and said that the actress is picture perfect. Vikram said: "There have been many beauty queens but I must say Aish has something that has stolen everyone's heart. She is picture perfect and I have seen her films, so it is not just about beauty but everything. She is always under a microscope and constantly being watched. So, she needs to be perfect all the time and I have seen how she does it in her own style." He also said that he is often told by fans about how they both look fantastic on screen. "All our fans keep saying you both look so nice together but the thing is I don't get her in movies so easily." Vikram also praised her dancing skills and added: "She dances so beautifully that during a shot, I just forgot myself and was lost watching her dance moves. It is music in motion. She is just perfect." Vikram, who is popular for his role in Tamil cinema and also did a few Malayalam and Telugu films, has been part of movies such as 'Sethu', 'Samurai', 'Raavanan', 'Pithamagan' and many more. He called his role of Aditha Karikalan (Chola emperor in 10th century) in Mani Ratnam's 'Ponniyan Selvan I' a 'dream role' as he always wanted to play a prince or a character of a warrior on-screen. He said: "We all are playing very interesting characters in this film and I must say I am playing my dream role as I always wanted to play a character which is regal and beautiful. Every movie Mani Ratnam sir has done is so enthralling and very different and I am glad to be part of his film. You know we call him Steven Spielberg of India." Mani Ratnam's directorial 'Ponniyin Selvan: I', starring Vikram, Aishwarya Rai Bachchan, Jayam Ravi, Karthi, Trisha, Aishwarya Lekshmi, Sobhita Dhulipala, Prabhu, R. Sarathkumar, Vikram Prabhu, Jayaram, Prakash Raj, Rahman and R. Parthiban, is all set to release on September 30. /IANS