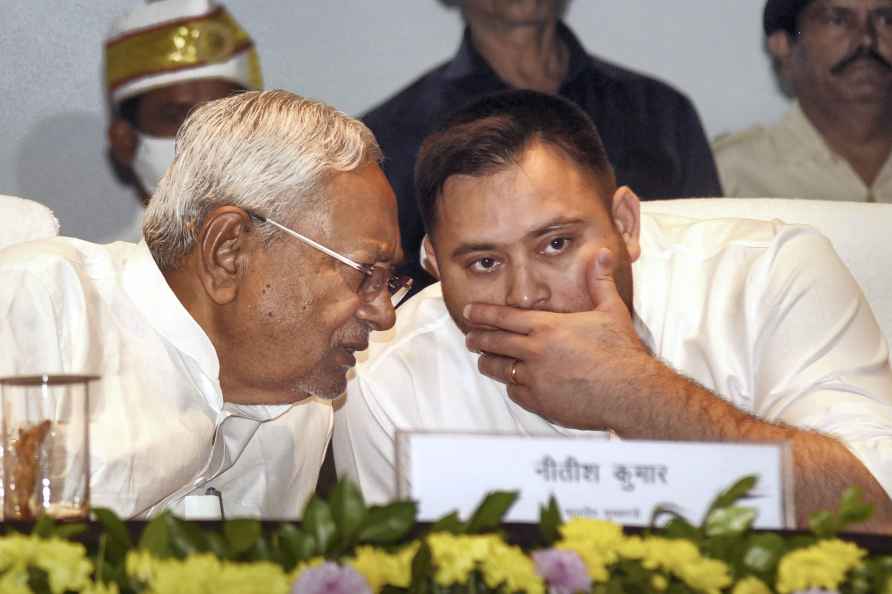 [Patna: Bihar Chief Minister Nitish Kumar interacts with Deputy Chief Minister Tejashwi Yadav during an event for the distribution of appointment letters to the newly appointed Veterinary Officers, in Patna, Tuesday, Sept. 27, 2022. ( /PTI] Patna, Sep 27 : Bihar Deputy Chief Minister Tejashwi Yadav on Tuesday took a dig at Home Minister Amit Shah over his statement that Purnea airport is nearing completion and would be functional shortly. "Since the Purnea airport is almost ready as per our home minister, please arrange for two tickets -- Mr Shah and me -- ," he said in an apparent wisecrack on the BJP leader. The RJD leader was returning to Patna after participating in the Samman rally in Fatehabad when the reporters asked him whether he had been to the Purnea airport. Notably, during the Purnea rally on September 23, the union home minister claimed that the airport in Purnea is almost complete and people of 12 adjoining districts would get cheap air tickets to go to Delhi and Mumbai. They would not have to go to Bagdogra or Patna to take a flight. His statement was badly trolled by RJD and JD-U leaders including Lalan Singh, national president of JD-U, Upendra Kushwaha, national president of JD-U parliamentary board, Jagadanand Singh, state president of RJD, Umesh Kushwaha, state president of JD-U and several others. "Our Chief Minister Nitish Kumar took an initiative to unite opposition parties in the country and you will see results in the 2024 Lok Sabha election. In 2019, NDA had won 39 out of 40 seats from Bihar. Now, you would see that BJP will not win a single seat from Bihar," Tejashwi said. /IANS

[Thiruvananthapuram: Police personnel deployed to maintain law and order after a mob of agitators attacked Vizhinjam police station following the arrest of one person in connection with violent protes […]