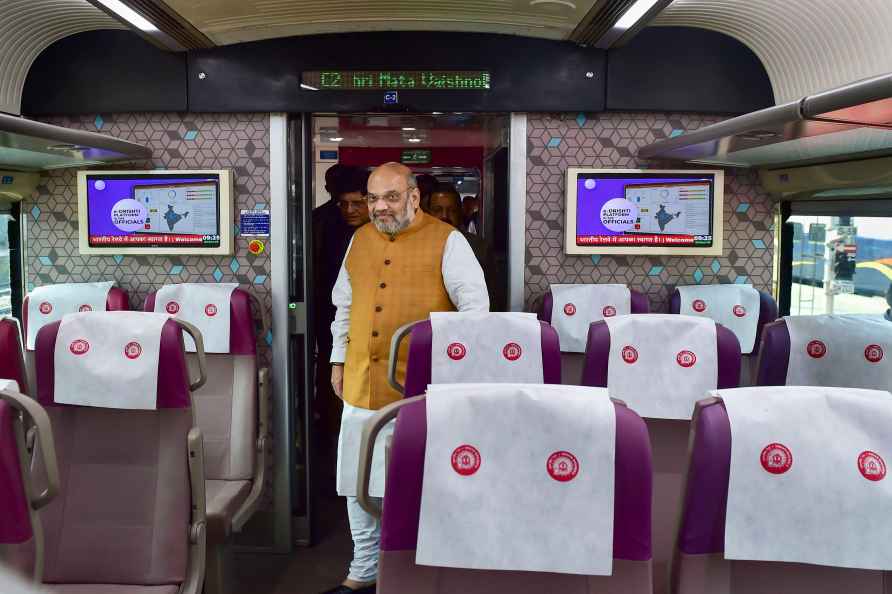 By Venkatachari Jagannathan Chennai, Sep 26 : A freight train on Vande Bharat Express platform may not be economically viable while other economical options are available for the targetted segments, said retired General Manger of Integral Coach Factory (ICF) Sudhanshu Mani. Mani is considered as the father of the Indian Railways' modern train Vande Bharat Express, a only passenger carrying train that can run at 160 kmph. The ICF is developing a cargo carrier called Gati Shakti Freight Train on Vande Bharat passenger train platform. Simply put, Vande Bharat is similar to the electric multiple unit (EMU) train without a separate engine. It is learnt, the ICF is planning to make a cabin with one or two wagons to test the proposed freight train's pulling power. Queried about building a freight train on Vande Bharat passenger train platform Mani told IANS: "What animal would this freight EMU be? To be run at 160 km/h? The cost of a 16-coach train would be Rs 60 crore plus. It may have reefers-refrigerated coaches. Other coaches would perhaps carry small containers. The target goods would seem to be FMCG, hardware and perishable products for which clients would pay handsomely for fast delivery from one point to another." Mani wondered how the freight train on Vande Bharat platform be any better than a Millennium type locomotive hauled train usually with 20 luggage/parcel vans pulled by one, or if top speed and acceleration are so important, two locomotives? "Such a train can be rigged together faster by using existing parcel vans or converting ICF coaches and two older locomotives by spending far less than the 60 crore for the freight EMU," Mani said. "The vibes on Indian Railways (IR) are progressive after this minis ter (Ashwini Vaishnaw) took over but even in such upbeat times, some irrationality keeps cropping up," he added. "The parcel traffic for Indian Railway is less than one per cent of its earnings, and going down, so have we thought of something to address the corrupt interface encompassing all departments?" Mani posed. He also wondered whether the Indian Railways has identified the routes which would offer to and fro traffic, given that many parcel vans run empty in one direction. "Have we taken some freight forwarders on board or merely hoping to get business through the fly by night middle men? What became of the ten odd Reefers manufactured in the early 2000s? If Indian Railways has good answers for these questions, so be it but otherwise the project appears to be infructuous.," Mani remarked. Even if some companies like Amazon have tied up for patronizing such trains, a Millenium type parcel train would work as well with much lower cost to Indian Railways, he opined. Reefers are a separate development, in any case, and can be attached to such a loco-hauled train too. "Moreover, where would we handle the cargo of these trains? On passenger platforms? Such massive handling on platforms defies logic when even the parcels and luggage we transport and handle today at the ends of the platforms is so cumbersome and unfriendly for both passengers and freight clients alike," Mani pointed out. He categorically ruled out commercial viability of the 16/20 coach cargo EMU considering the huge capital expenditure. I believe ICF is working on a 16-coach and a 20-coach configuration. Considering the huge capital expenditure, I cannot see any commercial viability of such trains. The Vande Bharat passenger train has a capacity to carry 1,128 persons. In terms of hauling tonnage, it will be about 110 at an average weight per passenger plus luggage. "Marginal increase in axle load is possible but it may reduce the speed. Operational cost for energy is 10 per cent lower in apple to apple comparison with conventional trains but maintenance cost is higher than conventional trains," Mani said. "Train 18/Vande Bharat essentially has a platform for a semi-high-speed passenger-carrying coach. I see no technical advantage in converting its platform as a flat-bed freight wagon," Mani added. According to him, one or two luggage vans can be added in front or rear of Vande Bharat passenger trains as test cases to check out commercial viability, although it does not add great value if the travel time is cut down by some hours. (Venkatachari Jagannathan can be reached at v.jagannathan@ians.in) /IANS

India-Australia trade pact to come into force from Dec 29
New Delhi, Dec 1 : Duties on 100 per cent tariff lines are to be eliminated by Australia under the India-Australia Economic Cooperation and Trade Agre

Indian markets scale new heights
Chennai, Dec 1 : Indian stock markets on Thursday continued to hit new heights with the Sensex of BSE touching a high of 63,583.07 points and Nifty of

Russian President Vladimir Putin speaks to participants of the Second...

New Delhi: Union Sports Minister Anurag Thakur with recipients of Sports and Adventure Awards at a dinner hosted by him, in New Delhi, Wednesday, Nov. 30, 2022. ( /PTI […]