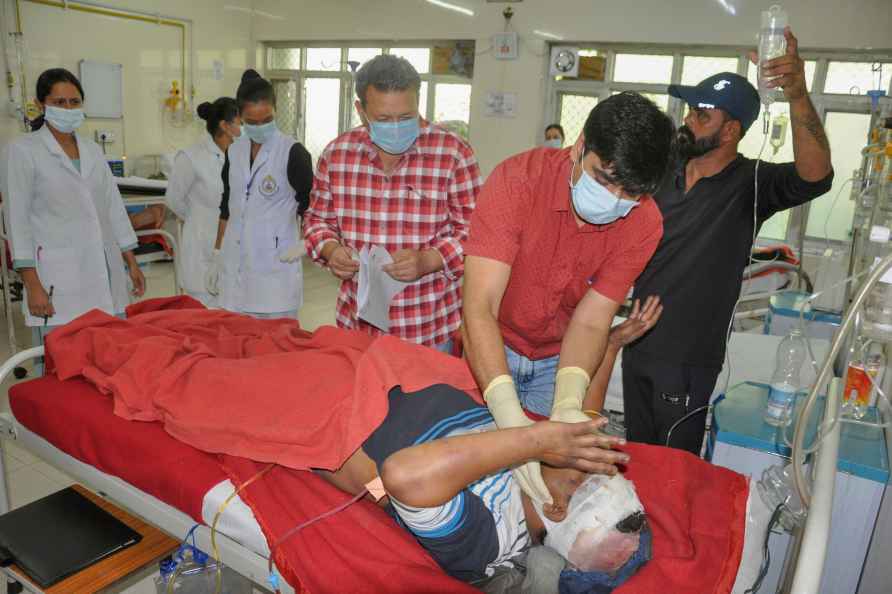 [Kullu: An injured passenger undergoes treatment at a hospital, after a tempo traveller fell into a gorge on Sunday evening, in Himachal Pradesh's Kullu district, Monday, Sept. 26, 2022. Atleast seven people were killed while 10 others sustained injuries in the accident, according to officials. ( /PTI] Shimla, Sep 26 : Seven tourists, comprising three IIT Varanasi students, were killed and 10 injured in a road accident in Himachal Pradesh's Kullu district, police said on Monday. The tourists, belonging to Delhi, Haryana, Uttar Pradesh, Rajasthan and Madhya Pradesh, were travelling when a Tempo Traveller (UP 14 HT 8272) skidded off the road and rolled down the hill near Jalori Pass in Banjar subdivision on Sunday night. Most of the injured were admitted to the Regional Hospital in Kullu town, some 200 km from the state capital. The cause of the accident is yet to be ascertained, an official told IANS. The administration had a tough time extricating the victims from the badly mangled vehicle. People in the area began rescue operations even before authorities reached the spot. The dead were identified as Saurabh, Priyanka Gupta, Kiran, Rishab Raj, Anshika Jain, Aditya and Ananmaya, Kullu Superintendent of Police Gurdev Sharma told the media. The injured included Rahul Goswami, Kshitija Agarwal, Priyapal, Ishan Gupta, Abhinav Singh, Nishtha Badoni, Rushav Lakshaya, Jai Aggarwal and driver Ajay Chauhan. A police officer told IANS that the accident spot had experienced continuous rainfall for the past three days, making the road slippery. Witnesses told police that the driver probably lost control over the vehicle while negotiating a turn. Himachal Pradesh Chief Minister Jairam Thakur expressed grief over the accident at Ghiyaghi near Jalori Jot. On receiving the information, he said the local administration rushed to the spot to undertake the rescue operation. The Chief Minister wished speedy recovery to the injured and directed the administration and hospital authorities to ensure best treatment of the injured. The government has announced an ex-gratia of Rs 4,00,000 to the next of kin of each of those killed and Rs 50,000 to those injured. /IANS