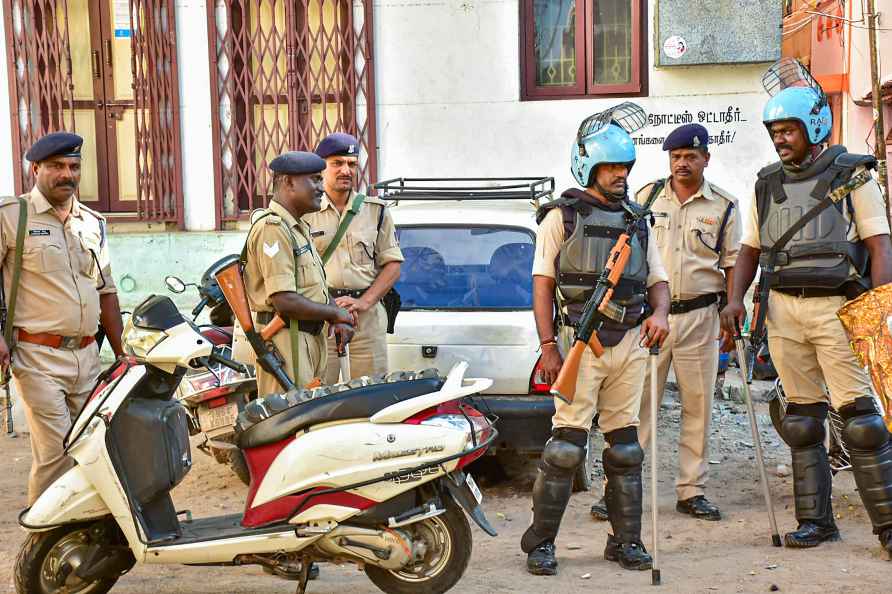 Chennai, Sep 26 : The Tamil Nadu Police continued its crackdown against the Popular Front of India (PFI) and Social Democratic Party of India (SDPI) cadres on Monday over the alleged Molotov cocktail attacks. This comes a day after Director General of Police (DGP) C.Sylendrakumar directed the district police chiefs and commissioners to take stringent action against those disrupting peace. The police have commenced the crackdown after incidents of motorbike-borne suspects throwing petrol and kerosene-laden burning bottles at the residences/ shops, offices of the RSS, BJP workers and their local leaders after the NIA arrest of the PFI leaders and cadres on September 22. The police on Sunday arrested several persons, including Syed Ali (42) who is the SDPI, Salem district president in connection with the attack on the residence of RSS Salem town functionary, V.K. Rajan's residence with petrol bomb. The police took action following CCTV visuals of the accused hurling burning kerosene-filled bottle at the residence of Rajan at 1.40 a.m. on Sunday. K. Khadeer Hussain, ward president of SDPI in Salem was the other arrested in the case. Both were presented before the magistrate and remanded to judicial custody. In Erode also police arrested four SDPI functionaries in a Molotov cocktail attack on the furniture shop of an RSS worker, V. Dakshinamoorthy. The arrested are Sadam Hussain, Khalil Rahman, A. Jaffar, and A. Ashik. The DGP has also warned of serious consequences against the perpetrators of violence and that stringent action would be taken against them, including invoking the National Security Act (NSA). The Tamil Nadu Police were conducting raids at several residences of people affiliated with the PFI and SDPI after the DGP's directive to the SPs and Commissioners. The Molotov cocktail attacks which commenced from Coimbatore have now spread to Erode, Salem, Ramanathapuram, Dindigul, Kanniyakumari and some parts of Chennai, including Tambaram. The police have been instructed to take stringent action against those involved in the violence. The state intelligence was also providing proper inputs on the perpetrators of violence and District Superintendents and Commissioners of police have been given instructions to arrest local leaders as well as district-wise leaders of both the organisations if found that they were part of conspiracies in these Molotov cocktail attacks. Meanwhile, BJP state president K. Annamalai said that the Tamil Nadu Police's hands were tied for the past 15 months and that it was at its peak. He said that the party will not be cowed down by the cowardly acts of Molotov cocktail attacks. The BJP state president also said that the party has constituted four fact-finding teams to report on the damage caused to the residences/ shops and offices of party workers and that a report would be submitted to the Union Home Minister Amit Shah after getting the feedback from the committees. /IANS

Bihar woman stabbed to death, husband claims accused cut off her breasts
Patna, Dec 5 : A woman of an OBC community was stabbed to death in Bihar's Bhagalpur district, police said on Monday. The family members, however, cla

Shriram Finance to focus on MSMEs and others

**EDS: TWITTER IMAGE POSTED BY @SandhuTaranjitS ON TUESDAY, DEC. 6, 2022** Seattle: India?s Ambassador to the US, Taranjit Singh Sandhu with Microsoft CEO Satya Nadella during a meeting, in Seattle, U […]