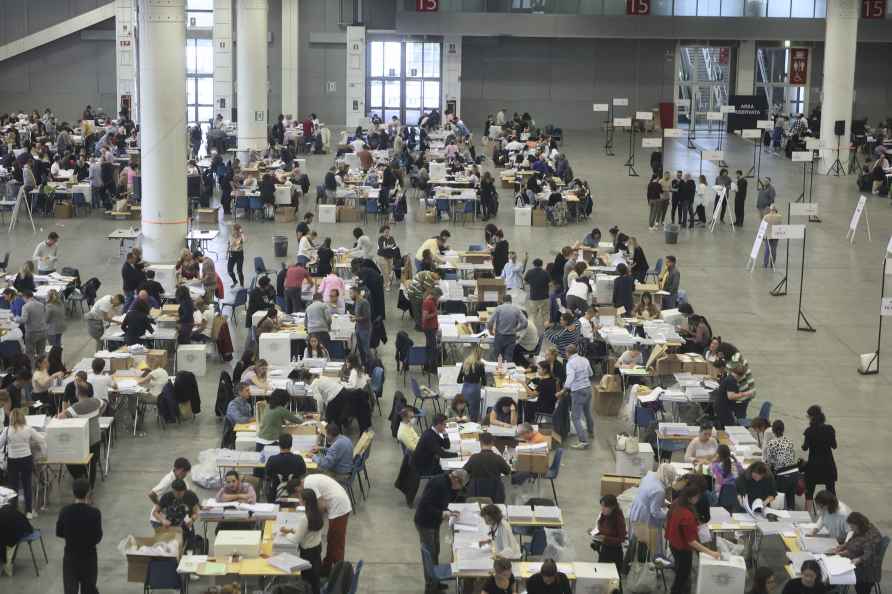 [Roma: Ballot papers voted by Italians living in Europe, Russia, and Turkey are prepared for the final count in Bologna, Italy, Sunday, Sept. 25, 2022. A total of some 5.8 million Italian voters live outside of their country. Italians were voting on Sunday in an election that could move the country's politics sharply toward the right during a critical time for Europe, with the war in Ukraine fueling skyrocketing energy bills and testing the West's resolve to stand united against Russian aggression. /PTI] By Sanjay Borkar Panaji, Sep 25 : Using God's name to switch political loyalties in Goa had recently caught the attention of the country. Now, BJP councillors in Goa's commercial capital Margao, many of them who have just defected from the Congress in the footsteps of Digambar Kamat, the man who claimed to be in touch with God, have made a very public display at a temple of their loyalty to the saffron party, even as they ignored Chief Minister Pramod Sawant's advice on how they should perform as representatives of the people. On September 12, launching an induction training programme for newly elected representatives, Sawant had appealed to them to stay away from politics in the local bodies. "Don't get involved in unseating sarpanches. Some do it to get their names on the board of the list of sarpanches. Such political drama takes place all the time. I request you all to work for the development of your areas. Then only can we ensure real development for Goa," Sawant said. On Friday, September 23, Sawant's exhortation went unheeded when 15 councillors, including eight from the BJP and seven who had just shifted their political allegiance from the Congress, unseated the Margao Municipality Chairperson Ghanshyam Shirodkar by moving a 'No Confidence Motion'. Unseating the chairperson and getting a new one installed had become a matter of prestige for Digambar Kamat, the Margao MLA who had recently switched sides from the Congress to the BJP. Hence no efforts were spared to win the election held on Friday. Kamat, incidentally, had caught the country's attention with his statement justifying his defection: "God told me 'you take the decision, I am with you'. Hence I decided to join the BJP'." Ghanshyam Shirodkar, although an Independent, was a Kamat supporter, but had distanced himself from the Margao MLA and got elected to the top municipality post by 15-10 votes on September 16. He defeated Damodar Shirodkar, who is believed to be close Kamat. Cross-voting by BJP councillors (new or old, no one knows), and the support of the Goa Forward Party (GFP), along with the vote of another unattached member, helped Ghanshyam Shirodkar win. Incidentally, he had moved away from Kamat after he did not become the chairperson a year and half ago, immediately after the municipal elections were held. Kamat and Goa Forward Party President Vijai Sardesai had formed an alliance to keep the BJP out in the 2021 municipal polls. They had reportedly resolved to rotate the post of chairperson and vice-chairperson between the candidates of their panels. As per the arrangement worked out by both Sardesai and Kamat, the MMC Chairperson's post had been given to GFP's Lyndon Pereira. After completing 15 months in office, honouring the arrangement worked out by the two parties, Pereira resigned on August 26, 2022. It was now the turn of a councillor chosen by Kamat to get elevated as chairperson. Kamat joined the BJP on September 14 and equations in the Margao municipality changed with the Congress councillors also changing their political allegiance. The election for a new chairperson took place two days after Kamat defected. Even after having the required number, the BJP's (Kamat's, actually) candidate Damodar Shirodkar lost, thanks to five of the saffron party councillors cross-voting. Before Kamat switched loyalties, the BJP had eight councillors, the Congress seven and GFP, eight, in the 25-member Municipal Council. Ghanshyam Shirodkar and a lady councillor are Independents. When Kamat changed his political colours, so did the Congress councillors, enabling the BJP to get a clear majority, yet it did not help on September 16. That was when they got a dressing down from the Chief Minister in Panaji. As a result, violating the principle he had laid down, the councillors got rid of Ghanshyam Shirodkar and they are expected soon to install his replacement. Sawant was particularly upset because he had met the councillors in Margao on September 15 and had been assured that Damodar Shirodkar would win the next day. Unsurprisingly, he did not take the cross-voting lightly. Justifying the unseating of Ghanshyam Shirodkar, the other Shirodkar told IANS: "We unseated him because he had won by splitting our group." He referred to the Chief MInister's September 15 meeting and said all the 15 councilors were present. During the election, however, Damodar Shirodkar got only 10 votes. "What will you call it? Isn't it a split created by Ghanshyam Shirodkar?" he asked. Damodar Shirodkar then recounted details of the second meeting that the councillors had with Sawant: "The Chief Minister asked me to bring all the 15 councillors to his official bungalow in Panaji. He told us that such cross-voting won't be tolerated in the BJP. He said those who wanted to do it can leave the room. But all remained seated. "Then the CM asked if all were united and nobody did cross-voting, then how did the BJP get only 10 votes?" After the meeting, according to Damodar Shirodkar, the councillors went to the temple of Lord Damodar and there everyone assured the deity that they had voted for the BJP candidate. He added that those who had resigned from the Congress after Kamat joined the BJP were yet to formally become members of the BJP. The act of the councillors of going to the temple and proving in divine presence that they did not engage in cross-voting has not gone down well with the people. They are asking why God is being dragged into the petty political games being played out in the mortal world. /IANS

FIFA World Cup: Ronaldo '50-50' to play against South Korea, says Portugal coach
[Croatia's Luka Modric, right, and teammates acknowledge the fans at the end of the World Cup group F soccer match between Croatia and Belgium at the

New Delhi, Dec 1 : VFS Global, the world's largest outsourcing and technology services specialist for governments and diplomatic missions, on Thursday said there was a steady increase in demand for Th […]

New Delhi, Dec 1 : The National Green Tribunal (NGT) recently granted a month's time to the Pollution Control Board (PCB), Uttarakhand along with other government officials to submit a response on una […]

Washington, Dec 1 : Former US President Bill Clinton announced that he has tested positive for Covid-19, with mild symptoms. In a tweet late Wednesday, the 76-year-old said: "I've tested positiv […]

Mumbai, Dec 1 : 'Fauda' star Lior Raz greeted Ayushmann Khurrana and said that he was a "big fan" of him. Lior Raz along with Avi Issacharoff were present at International Film Festival o […]