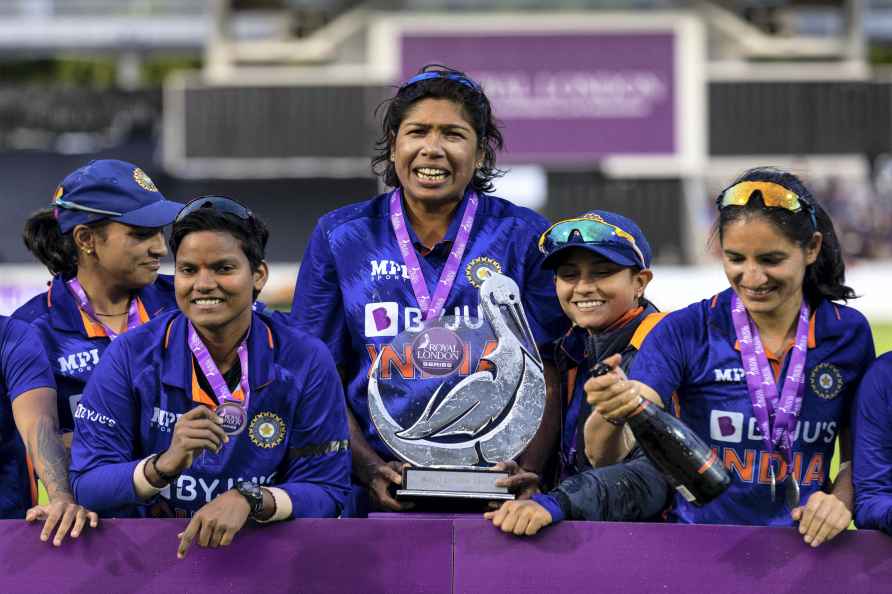 [London: CAPTION CORRECTS NAME OF PLAYER India's Jhulan Goswami, centre, celebrates with the trophy and teammates after winning the match against England in the third women's one day international match at Lord's, London, Saturday Sept. 24, 2022. /PTI] London, Sep 25 : Legendary fast bowler Jhulan Goswami on Sunday hoped she had been successful in inspiring the next generations to play "this beautiful game" while penning a heartfelt farewell note in which she confirmed her retirement from all formats of the game. On Saturday, Jhulan was given a fitting farewell at Lord's, as India defeated England by 16 runs to seal a 3-0 ODI series sweep. While she was dismissed for a golden duck with the bat in her final match, she clinched figures of 2/30 in her ten overs, which included three maidens and taking the wicket of Kate Cross in her final over. "To my cricket family and beyond. So, the day has finally arrived! Like every journey has an end, my cricket journey of over 20 years ends today as I announce my retirement from all forms of cricket." "As Ernest Hemingway said, "it's good to have an end to journey towards, but it is the journey that matters in the end'. For me, this journey has been the most satisfying. It has been exhilarating, thrilling to say the least, adventurous. I have had the honour of donning the India jersey for over two decades and serving my country at the best of my abilities. There is a sense of pride every time I hear the National Anthem before a match." Considered as one of the greatest fast bowlers to have ever played the game, Jhulan represented India in 12 Tests, 204 ODIs and 68 T20Is, picking 355 wickets across formats, the most by any bowler in women's international cricket. In ODIs, she picked 255 wickets, a record in women's international cricket. "Cricket has given me several gifts over the years, the greatest and the best, without doubt, has been the people I have met along this journey. The friends I made, my competitors, teammates, the journalists I interacted with, match officials, board administrators and people who love watching me play." "I have always been honest as a cricketer and hope, I have been able to contribute to the growth of women's cricket in India and the world. I hope I have been successful in inspiring the next generation of girls to play this beautiful game," added Jhulan. Jhulan played for India in five Women's ODI World Cups - 2005, 2009, 2013, 2017 and 2022. She remains the leading wicket-taker in the history of the Women's Cricket World Cups with 43 scalps. She went on express her gratitude to the people who have been a part of her cricketing journey. "Ever since watching the Women's World Cup final at Eden Gardens back in 1997, it was my dream to play for India, and I am thankful to the BCCI (Board of Control for Cricket in India), CAB (Cricket Association of Bengal), Women's Cricket Association of India (WCAI) and Air India officials for reposing faith in me and giving me the opportunity to fulfil my dream." "I want to thank the National Cricket Academy (NCA) for taking care of my injuries and keeping me fit as fiddle over the years. I am grateful to all the coaches, trainers, physios, and ground staff who have been an integral part of this journey. A huge shout out to all the captains I have played under. Their faith in my abilities helped build my confidence." "I want to take a moment to thank my family (my parents, siblings) who stood by me in every situation. Not to forget my friends, who have been my best critics and biggest supporters. Last but not the least, I want to thank my childhood coach for having backed me in my endeavour. I also want to express my gratitude towards my fans, journalists, and broadcasters for backing me and giving wings to women's cricket." Jhulan signed off by hinting that she won't be away from the sport for long. "I have cherished every moment of the last 20 years of my life as an international cricketer with my teammates on and off the field. I have always loved you cricket and even as I retire as a professional player, I will never be too far away from you. Thank you." /IANS

Alert in south coastal Andhra for cyclone 'Mandous'
[**EDS: IMAGE VIA ISRO** Bay of Bengal: The satellite image of cyclonic storm ?Mandous? at around 10: 30 am, Thursday, Dec. 8, 2022. The cyclonic stor

By Nirendra Dev New Delhi, Dec 7 : In a landmark development which was hailed by an apex Eastern Nagaland-based body as "a very successful" meeting, Union Home Minister Amit Shah assured the delega […]