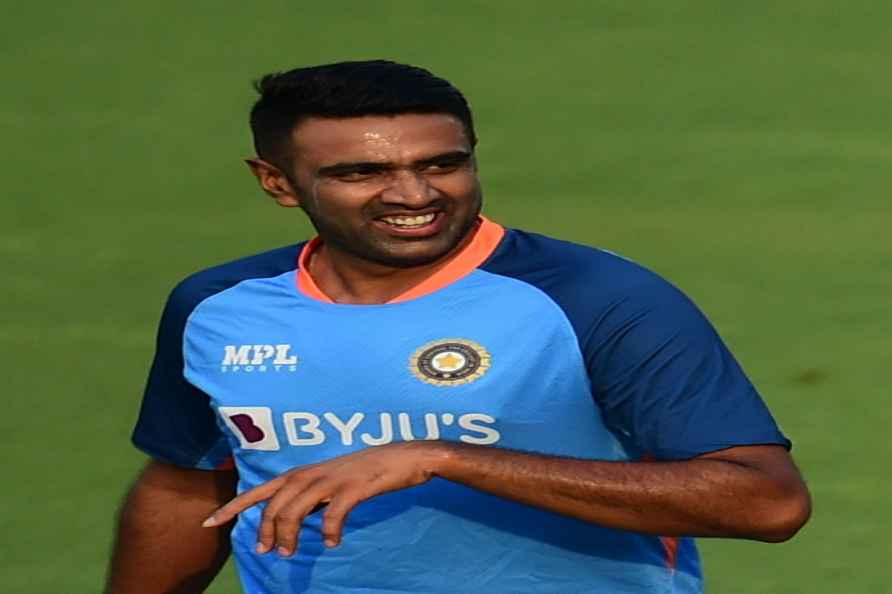 [**EDS: FILE PHOTO** Mohali: In this file photo dated Sept. 19, 2022, R Ashwin during a practice session ahead of the first match of the T20 cricket series between India and Australia, in Mohali. Ashwin on Sunday said wickets ought to be credited to bowlers' accounts when they run out batters at the non-striker's end for backing up too far, as it requires "presence of mind" after bowler Deepti's running out Dean to claim England's last wicket, after the batter had backed up, led to a controversy. ( /PTI] London, Sep 25 : The cricketing world has been left divided after off-spin all-rounder Deepti Sharma ran out England's Charlie Dean in the 44th over at the non-striker's end to get a 16-run victory for India over England at Lord's to complete a 3-0 sweep. Only last week, in the changes made by the International Cricket Council (ICC), the method of effecting a run out from the non-striker's end was moved from Law 41 of 'Unfair Play' to Law 38 of 'Run out' section, making it no longer an unfair mode of dismissal. With a majority of England cricketers, both men's and women's, disagreeing over the mode of dismissal, Deepti has found people speaking in her favour of running out Charlie from non-striker's end on Saturday. Ace India off-spinner Ravichandran Ashwin, who had famously ran out England white-ball skipper Jos Buttler in the same manner during the 2019 IPL, backed Deepti. "Why the hell are you trending, Ashwin? Tonight is about another bowling hero @Deepti_Sharma06," wrote Ashwin on Twitter. When England wicketkeeper-batter Sam Billing pointed out that veteran pacer James Anderson could have got more wickets with this mode of dismissal, Ashwin joined the debate by tweeting that a bravery award be constituted for the bowlers for effecting the run-out from non-striker's end. "In fact that's a great idea. How about awarding that wicket to the bowler for "presence of mind" under immense pressure and of course knowing the social stigma that he/she would have to deal with post doing it. How about a bravery award to go with it too @ICC." England opener Alex Hales, currently featuring in the T20I series against Pakistan, replied to Billings tweet by typing, "It shouldn't be difficult for the non striker to stay in their crease til (till) the ball has left the hand." In his other tweet, Hales further said, "The ball didn't leave the hand though...I'm not talking necessarily about this incident, but just the 'mankad' issue in general. It wouldn't be an issue if batters simply remained in the crease until the ball has left the hand." Former India batter Virender Sehwag lashed out at England cricketers showing their anger towards Deepti. "Funny to see so many English guys being poor losers. #Runout," wrote Sehwag on Twitter. Former India opener Wasim Jaffer commented in Deepti's favour on Twitter. "It's actually quite simple. Ball comes into play when bowler starts run up. From that moment on as a batter or non striker you've to keep your eyes on the ball, if you're a bit careless, opposition will get you out. And you can get out at either ends." The wording of MCC Law 41.16.1 says, "If the non-striker is out of his/her ground at any time from the moment the ball comes into play until the instant when the bowler would normally have been expected to release the ball, the non-striker is liable to be Run out." "In these circumstances, the non-striker will be out Run out if he/she is out of his/her ground when his/her wicket is put down by the bowler throwing the ball at the stumps or by the bowler's hand holding the ball, whether or not the ball is subsequently delivered." /IANS

Rupee slumps 76 paise to close at 82.61 (provisional) against US dollar.

Pune, Dec 5 : The Maharashtra Police in Pune have launched a probe into a complaint filed by a Haryana student, alleging her roommates extorted, stripped, threatened, blackmailed and molested her, pol […]