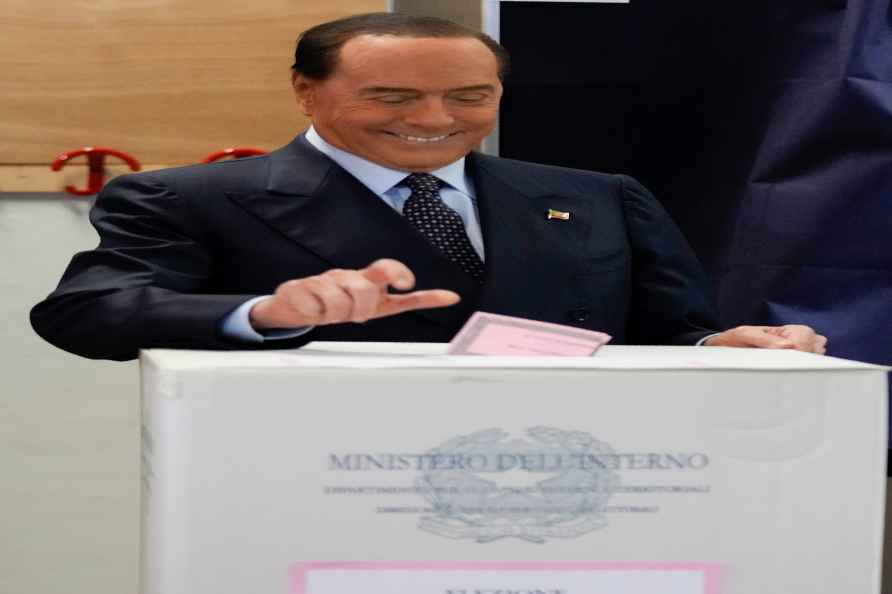 [Silvio Berlusconi, leader of center-right, populist Forza Italia casts his ballot at a polling station in Milan, Italy, Sunday, Sept. 25, 2022, in Milan, Italy, Sunday, Sept. 25, 2022. Italians are voting in a national election coming at a critical time for Europe. Soaring energy bills, largely caused by the war in Ukraine, have households and businesses fearful they can't keep the heat or lights on this winter. /PTI] Rome, Sep 25 : Polls opened to renew the parliament in Italy early on Sunday, in a snap election seen as crucial for the country. Over 50 million citizens, including some 4.7 million living abroad, are eligible to cast their ballots at 61,566 polling stations, which will remain open from 7 a.m. (0500 GMT) to 11 p.m. (2100 GMT) local time, Xinhua news agency reported. They are set to choose the 400 deputies and 200 senators that will form the two houses of the next assembly. A right-wing coalition and a center-left alliance are seen as the main contenders. Adding to them are a smaller coalition of two centrist parties, and the populist Five Star Movement (M5S), with both the coalition and the M5S running alone. The right-wing alliance -- made up of the nationalist Brothers of Italy, the League, and center-right Forza Italia -- appeared to be leading in all opinion polls published up to two weeks before the vote. Brothers of Italy appeared as the frontrunner, followed at a short distance by the Democratic Party, the key force of the center-left coalition. Giorgia Meloni, leader of the Brothers of Italy, is therefore seen as a potential candidate for the post of next prime minister of Italy. If so, she would be the first woman to serve in such a role in the country. For the first time ever, as a result of a recent constitutional reform, 18-year-olds in the country will be allowed to vote to elect the Senate and the Chamber of Deputies. This applies to almost 2.7 million young citizens who have just come of age, the Interior Ministry said. Vote counting will begin soon after the closure of all polling stations, and early results are expected as soon as in the first hours of Monday. /IANS

Ukraine hit by 8th wave of Russian strikes
[In this handout photo released by the administration of the Kursk region of Russia on Tuesday, Dec. 6, 2022, smoke rises from the area of Kursk airpo

Shelling by Ukrainian forces in a street in Donetsk

Smoke and flame rise from a burning vehicle damaged in shelling by Ukrainian forces in a street in Donetsk, the capital of Russian-controlled Donetsk region, eastern Ukraine, Tuesday, Dec. 6, 2022. / […]

Pair of lion released into the Lion Safari

Mumbai: A pair of lions in their enclosure after the release by Maharashtra Forest Minister Sudhir Mungantiwar into the Lion Safari at Sanjay Gandhi National Park in Mumbai, Tuesday, Dec. 6, 2022. ( / […]

Mysuru (Karnataka), Dec 5 : The mother of two victims in the Lingayat Mutt sex scandal on Monday wrote a letter to President Droupadi Murmu, mentioning that they either be given justice or granted con […]