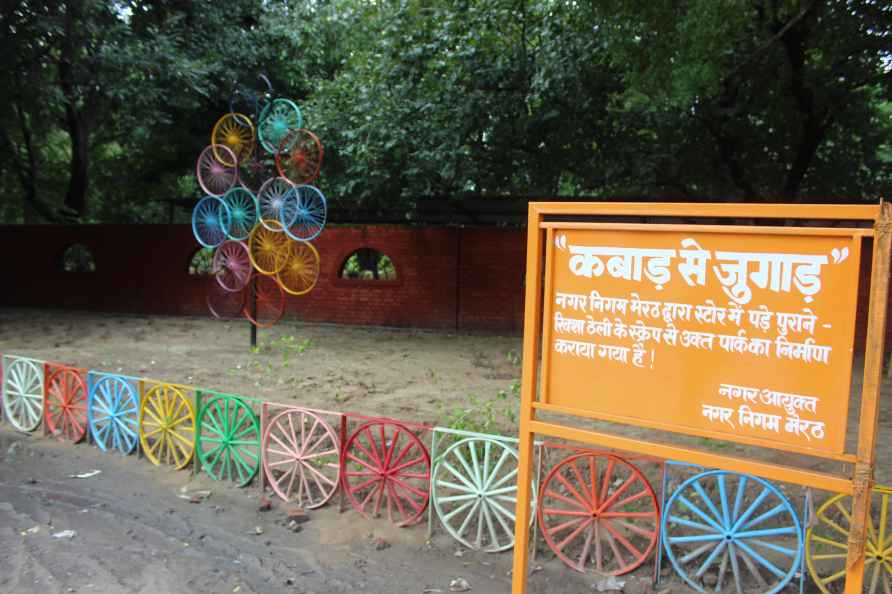 [Meerut: A park created by Meerut Municipal corporation from scrap and waste materials under the city's 'Kabaad se Jugaad' campaign, in Meerut, Sunday, Sept. 25, 2022. Prime Minister Narendra Modi talked about the campaign in his 93rd 'Mann Ki Baat' program on Sunday. ( /PTI] New Delhi, Sep 25 : As a tribute to the great freedom fighter Bhagat Singh, the Chandigarh airport will now be named after the iconic martyr, Prime Minister Narendra Modi said on Sunday during his monthly radio broadcast 'Mann Ki Baat'. "It has been decided that the Chandigarh airport will now be named after Shaheed Bhagat Singh. It had been waiting for a long time. I congratulate the people of Chandigarh, Punjab, and Haryana and the entire country for this decision," he said in his half-hour address. Touching upon various subjects, Modi also spoke about the translocation of Cheetahs from Namibia to Madhya Pradesh's Kuno National Park earlier this month. "People from many corners of the country expressed happiness over the return of Cheetahs. 130 crore Indians are elated and filled with pride. A task force will monitor Cheetahs, on the basis of which we will decide when you can visit the Cheetahs," Modi said. The Prime Minister invited suggestions for naming the wild cats. "I request people to share their views on the naming of the campaign and Cheetahs. It will be great if the naming of Cheetahs is in tune with our traditions. Also, suggest how humans should treat animals. Participate in this contest and maybe you could be the first one to witness the Cheetahs," he added. Modi asked the people of India to break all previous records of buying khadi, handloom or handicraft products. Plastic bags are extensively used during festivals, he said. However, the harmful waste of polythene during the festivals of cleanliness is against the spirit of the festivals, he said. /IANS