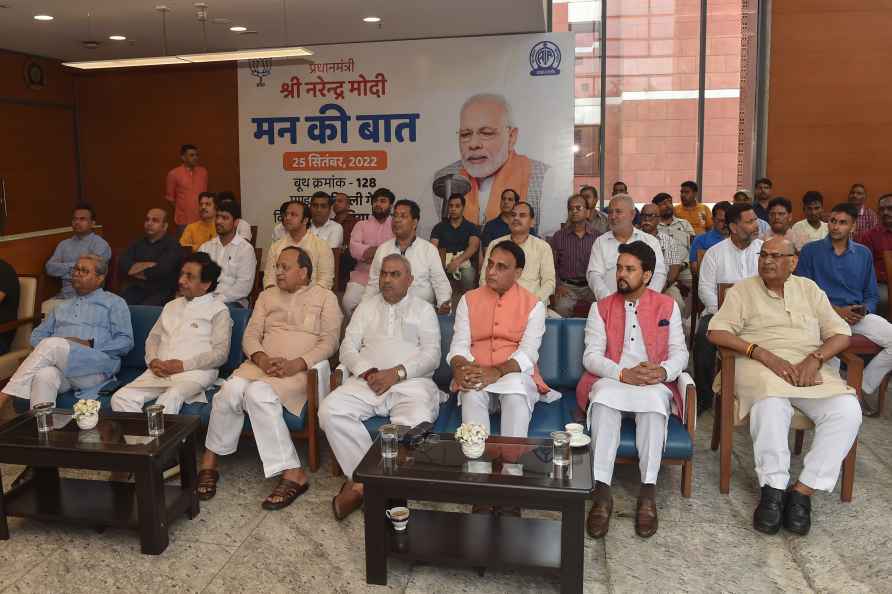 [New Delhi: Union Minister Anurag Thakur with BJP leaders and workers listens to Prime Minister Narendra Modi's 93rd 'Mann Ki Baat' programme, at BJP headquarters in New Delhi, Sunday, Sept. 25, 2022. ( /PTI] By Santosh Kumar Pathak New Delhi, Sep 25 : The suspense over the party elections for the post of a full-time Congress' president left vacant since the last three years seems to be almost ending now. The agenda with which the former Congress President Rahul Gandhi had resigned from his position seems to fructify now. If there are no major political rumblings expected, then Ashok Gehlot, who is a seasoned politician and troubleshooter for the Congress, is set to become the party's new national president through elections on October 17. After nearly 24 years, a non-Gandhi Congress leader is set to be the party's new national president. For the last 24 years, the reins of the Congress have been controlled by Sonia Gandhi or Rahul Gandhi. In such a situation all top and veteran party leaders are saying that the issue of dynasty rule levelled by the BJP will be finally put to rest. The Congress feels that the issue of dynasty politics or 'parivarvaad' which the BJP has been cornering the Congress with will completely end following Rahul Gandhi's decision to not to become the party's president. But is this really going to happen? Prime Minister Narendra Modi had himself raised the issue of nepotism and dynasty politics from the ramparts of the Red Fort earlier this August to target the opposition parties. This issue of dynasty politics has been raised by Union Home Minister Amit Shah and BJP President J.P. Nadda, and all other BJP leaders, Union Ministers, BJP-ruled state chief ministers and party workers to target the Congress and specially the Gandhi family. Therefore, it remains to be seen whether the saffron party will raise this issue after the Congress gets a non-Gandhi at its helm? Has Rahul Gandhi played a big masterstroke by electing a non-Gandhi Congress leader as the party president? The BJP has dismissed such claims as mere political stunts. The BJP believes that Rahul Gandhi is going to play the same political gamble on the Congress' organisational front similar to what Sonia Gandhi played by making Manmohan Singh the country's Prime Minister, but this is not going to change the functioning of the Congress. The BJP is also trying to attack the Congress through Ashok Gehlot's statement that the election for the post of Congress President is just a sham. According to the BJP, dynasty rule has become the character of the Congress and the BJP will continue to work to warn and caution the people of the country on this. While addressing a rally in Purnia, Bihar, on Friday, Shah, while pitting the 2024 Lok Sabha elections as a political fight between Prime Minister Narendra Modi vs Rahul Gandhi, asked the people that who should become the Prime Minister of the country in 2024 -- Modi, Nitish Kumar or Rahul baba? The BJP's national spokesperson Tom Vadakkan, who had been a part of the Congress for a long time before joining the BJP, launched a scathing political attack on Rahul Gandhi. Vadakkan, while holding a press conference at the BJP headquarters in New Delhi on Wednesday slammed Rahul Gandhi, saying that whether Ashok Gehlot or Shashi Tharoor becomes the Congress President, they will be remote-controlled by Rahul Gandhi and the reins of the party will firmly remain in his hands. In the coming days, Ashok Gehlot may be seen working as the Congress National President, but in every decision taken by the Congress, the BJP will tell the people of the country whether that decision was taken by Gehlot or on the instructions of the Gandhi family. It is clear from the BJP's political attacks on the issue of dynasty politics that it will remain alive even if a non-Gandhi becomes the Congress' national president and the Congress, especially Rahul Gandhi, will have to face the BJP's allegations repeatedly and continuously. /IANS