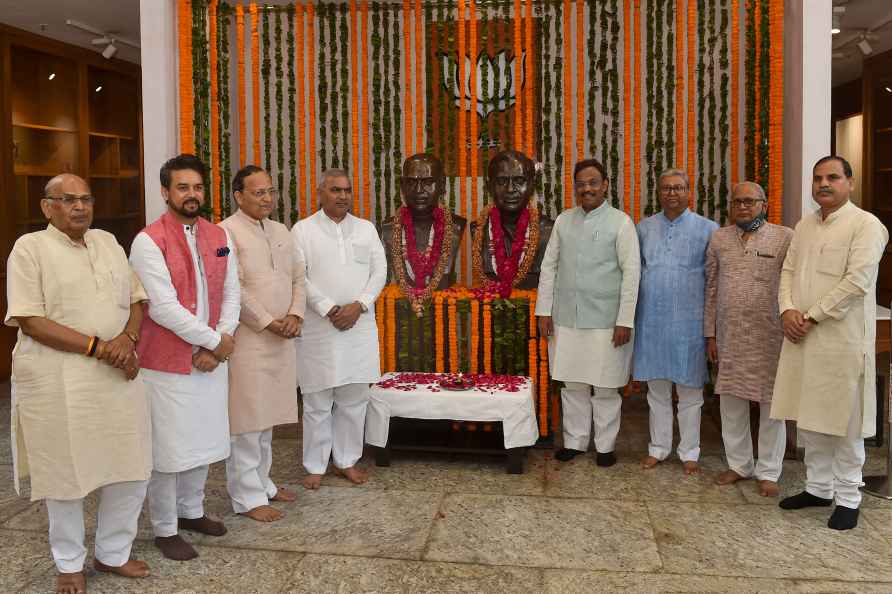 [New Delhi: Union Minister Anurag Thakur, BJP Jt. General Secretary (ORG.) Shiv Prakash and other BJP leaders after paying tribute to Pandit Deendayal Upadhyaya on his birth anniversary, at BJP headquarters in New Delhi, Sunday, Sept. 25, 2022. ( /PTI] By Nirendra Dev New Delhi, Sep 25 : Nagaland Congress Chief Kewekhape Therie has said that if BJP and its ally NDPP of Neiphiu Rio do not file their nomination then his party will not file nominations as well. The Congress wants implementation of a solution to the Naga issue under the President's rule, he added. In a statement, Therie and one-time compatriot of Nagaland Chief Minister Neiphiu Rio, says, "In my view, the core committee (of MLAs and Ministers) has nothing to do with the negotiation. Union Home Minister Amit Shah entrusting the core committee to convince NSCN(IM) is something like asking a child to convince his father." "It is understood that the ruling alliance's leadership lacks courage to mediate between the Indian government and NSCN (IM). UDA (NDPP, BJP, NPF) and NSCN (IM) are hand-in-glove and what NSCN(IM) speaks, the Chief Minister (Neiphiu Rio) also speaks in the same language and tone," the Nagaland Congress Chief added. Ironically in 1998, Therie was a compatriot of Rio and follower of S.C. Jamir. Therie himself filed nomination on a Congress ticket in 1998 when other parties, including the BJP, had boycotted and also became a Cabinet Minister under veteran S.C. Jamir. "Time flies, politics also changes !" he said. The Nagaland Congress Chief acknowledges the power of time and transformation and thus says in his statement: "We all know, in 1998 NPC (now NPF....and NDPP is only a splinter of NPF but now a more dominant party) did not participate in the election on the same slogan and Congress returned almost unopposed. In 2018, the same slogan was raised again. Some senior Congress leaders trusting the "Solution not Election" slogan prevented All India Congress Committee (AICC) from preparing for elections." He added, "Just before filing nominations, AICC directed us to file nominations in case other political parties filed nominations and we were wiped out." The fact of the matter is Therie is evading/avoiding debate about 'fund crunch' in Nagaland Congress in 2018 and he had developed strong differences then with Congress General Secretary C.P. Joshi on the matter. Congress could field only 18 candidates and most were non-serious. But nevertheless, now Therie makes a clearer statement -- and says: "NNPGs decision to prevent "election for solution" is welcome because we also want implementation of solution at the earliest. Congress will stand with them." As Therie mentions NNPG, on September 24, 2022, the NSCN-IM leaders, including V.S. Atem, now negotiating with the Centre, met an allegedly 'friendly group' called 'Naga Hoho' in Delhi's APJ Abdul Kalam Nagaland House. Now the more creamy part of Therie's statement issued on Saturday in Dimapur, says: "Can NNPGs really prevent election under any circumstance is the question with the future at stake. It will amount to failure of constitutional machineries before the world and will reflect on the BJP government at the Centre. If we do not remove the roadblock to implementation of solution (meaning the Rio government), people will continue to suffer more and even lose our identity and religion." He also said: "If we look carefully at the problem, both sides have agreed that within the Framework Agreement, the details and execution plan are to be worked out shortly, for implementation. This is now the seventh year after signing. The Framework Agreement is a gentlemen's agreement on behalf of the nation and it was signed before the people. No party can turn their back from the agreement." He also says, "If there is any misinterpretation or misunderstanding, it is not the fault of the people." Therefore, Therie said the aspiration of the people is clearly written on the wall -- "that we want the solution to be implemented. People want peace, safety and security, one government, one tax and development". The phrase 'one tax' is actually aimed at suggesting indiscriminate extortion culture the Naga people are suffering in the state for the last 25 years. Therie added: "Stakeholders have rejected Pan 'Naga Hoho'. According to Indian government, flag and constitution are not negotiable. If so, there is nothing more to negotiate for Nagaland. The NNPG's agreed position for Nagaland if implemented will lead to other solutions. As such, there is no reason as to why the agreed position should not be implemented in Nagaland." The Naga talks between NSCN-IM and the Centre have revived and a delegation of the ultra leaders are camping in Delhi since September 19. They have numerous rounds of parleys with peace emissary A.K. Mishra, a former Intelligence Bureau official. Sources said the parleys are moving positively and Chief Minister Neiphiu Rio is also likely to arrive in the national capital. A delegation of NNPG leaders led by convener N. Kitovi Zhimomi is also expected here soon. (Nirendra Dev is a New Delhi-based journalist. The views expressed are personal) /IANS