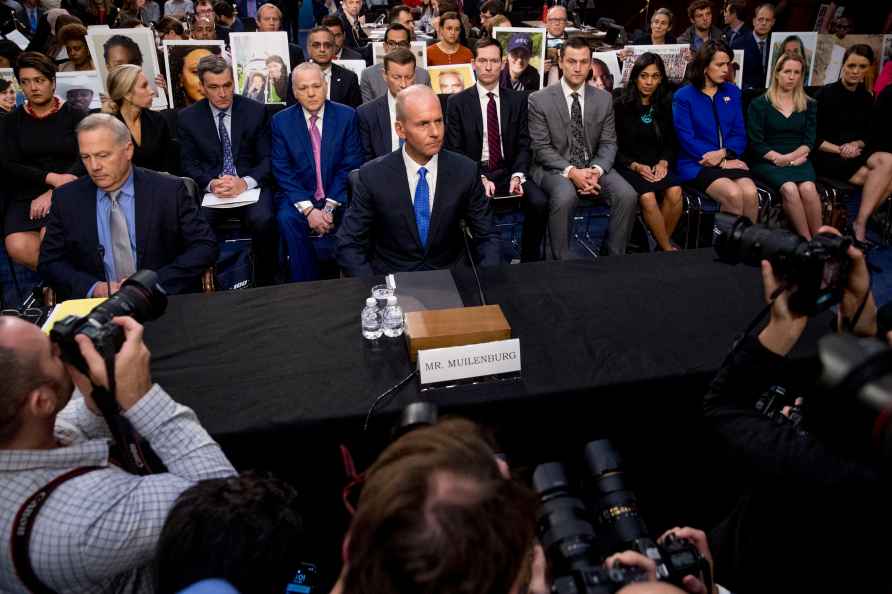 Chicago, Sep 23 : US aerospace major Boeing will pay $200 million and its former CEO will pay $1 millions to settle charges over misleading investors after the two deadly crashes involving 737 MAX planes, the Securities and Exchange Commission (SEC) said. The crashes of Lion Air Flight 610 in October 2018 and Ethiopian Airlines Flight 302 in March 2019 involved the 737 MAX airplane and a flight control function called the Maneuvering Characteristics Augmentation System, reorts Xinhua news agency. According to the SEC's orders, after the first crash, Boeing and then Chief Executive Officer Dennis Muilenburg knew that system posed an ongoing airplane safety issue, but nevertheless assured the public that the 737 MAX plane was "as safe as any that has ever flown the skies". Later, following the second crash, Boeing and Muilenburg assured the public that there were no slips or gaps in the certification process with respect to the system, despite being aware of contrary information. "In times of crisis and tragedy, it is especially important that public companies and executives provide full, fair, and truthful disclosures to the markets," SEC Chair Gary Gensler said in a statement. "The Boeing Company and its former CEO, Dennis Muilenburg, failed in this most basic obligation," Gensler said. "They misled investors by providing assurances about the safety of the 737 MAX, despite knowing about serious safety concerns." "Boeing and Muilenburg put profits over people by misleading investors about the safety of the 737 MAX all in an effort to rehabilitate Boeing's image following two tragic accidents that resulted in the loss of 346 lives and incalculable grief to so many families," said Gurbir S. Grewal, director of the SEC's enforcement division. The SEC's orders against Boeing and Muilenburg find that they negligently violated the anti-fraud provisions of federal securities laws. Without admitting or denying the SEC's findings, Boeing and Muilenburg consented to cease-and-desist orders that include penalties of $200 million and $1 million, respectively. Boeing's commercially best seller 737 MAX was grounded globally in March 2019 in the wake of the two deadly air crashes that killed a total of after 346 people in less than a year. Amid growing crisis, then CEO Muilenburg resigned from his position in December 2019. In November 2020, the US Federal Aviation Administration cleared Boeing 737 MAX to fly again after a 20-month grounding. /IANS

Indian dies after being hit, dragged by truck in Canada
Toronto, Nov 27 : A 20 year-old Indian student from Haryana was hit and dragged by a pickup truck while he was crossing a pedestrian crosswalk on a cy

Tokayev sworn in as Kazakh President
Astana, Nov 27 : Kassym-Jomart Tokayev was sworn in as the Kazakh leader. After taking an oath at an inauguration ceremony held in the capital c