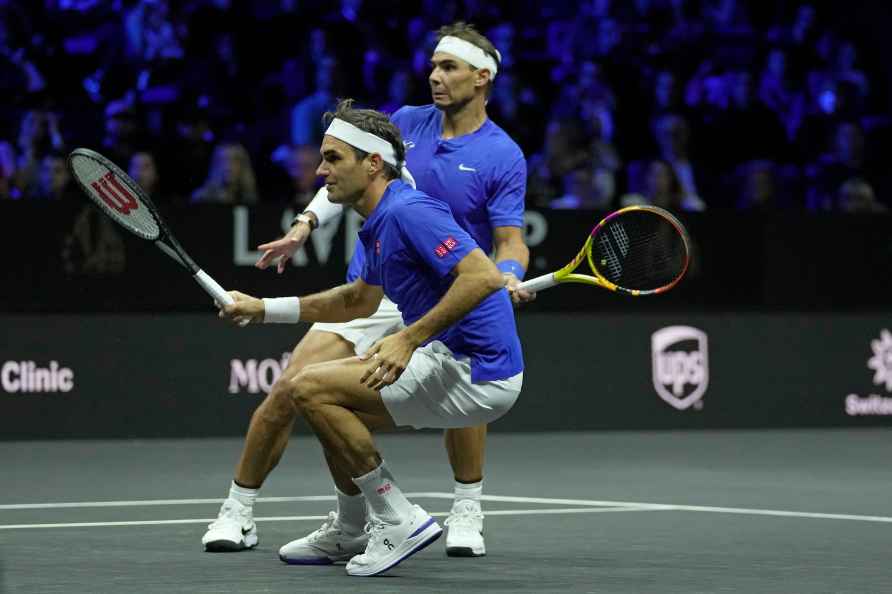 [Team Europe's Roger Federer, front, and Rafael Nadal in action during their Laver Cup doubles match against Team World's Jack Sock and Frances Tiafoe at the O2 arena in London, Friday, Sept. 23, 2022. /PTI] London, Sep 24 : Tennis ace and one of the most revered sportspersons in the modern era, Roger Federer finally bid adieu to his tennis career and fans after losing a doubles match in the Laver Cup to Jack Sock and Frances Tiafoe of the United States. The 41-year-old Swiss great, the winner of 20 Grand Slam singles titles, teamed up with his long-time friend and rival, Spanish stalwart Rafael Nadal in his last contest on Friday, losing a doubles match to the American duo 4-6, 7-6(2), 11-9. "It's been a perfect journey," Federer said. "I would do it all over again," in his farewell address. The former world No. 1 looked sharp around the net and fired his seemingly effortless groundstrokes through the court throughout the two-hour, 16-minute clash, according to atptour.com. However, he was ultimately unable to earn his 1,382nd career win in singles and doubles, falling to the Team World pair of Sock and Tiafoe. "We'll get through this somehow, will we? Right?" Federer said. "I'm happy, I'm not sad. It feels great to be here and I enjoyed tying my shoes one more time. Everything was the last time. The match was great, I couldn't be happier. It's been wonderful." Federer, who has not played since the 2021 Wimbledon quarterfinals, had announced last Thursday that he would retire from Grand Slams and the ATP Tour after the Laver Cup here in London. Federer had decided before the start of the tournament that he would only play one doubles match at the Laver Cup held in London's O2 Arena. The defeat meant Team Europe were locked at 2-2 with Team World at the end of the opening day of the event. Team Europe has earlier won two singles match while Team World claimed one singles victory. The Swiss is leaving the sport 19 years after winning his first Grand Slam title at Wimbledon in 2003. Nadal (22) and Novak Djokovic (21) have both surpassed Federer's tally of Grand Slam titles. Team Europe have won all four previous editions of the Laver Cup. Italian Matteo Berrettini will take Federer's spot over the weekend as an alternate in this year's edition. "Playing with Rafa on the same team, and having the guys, everybody here, all the legends -- Rocket, Edberg, Stefan --thank you," said Federer, who was joined on court by his parents, wife Mirka and their four children. "I didn't want it to feel lonely out there. It felt lonely for a second when they told me to go out... but to be saying goodbye on a team, I always felt I was a team player at heart. Singles doesn't really do that but I've had a team that travelled with me around the world. It's been amazing with them, so thanks to everybody who made it work for so many years. "And then of course being on the team with Andy, Thomas, Novak, Matteo, Cam, Stefanos, Rafa and Casper... and also the other team, you guys are unbelievable. It's been a pleasure playing all these Laver Cups. "It does feel like a celebration to me. I wanted to feel like this at the end, and it's exactly what I hoped for, so thank you." Federer won 103 tour-level titles and spent 310 weeks at No. 1 in the ATP Rankings. He first faced Nadal in 2004 at the ATP Masters 1000 event in Miami. They slugged it out a further 39 times over the years, competing against each other in 24 finals. Having built a special relationship, it was fitting for Federer to end his career alongside the Spaniard, with Novak Djokovic and Andy Murray cheering them on from the sidelines, according to atptour.com. "My wife's been so supportive. She could have stopped me a long, long time ago, but she didn't. She kept me going and allowed me to play. It's amazing. Thank you." /IANS