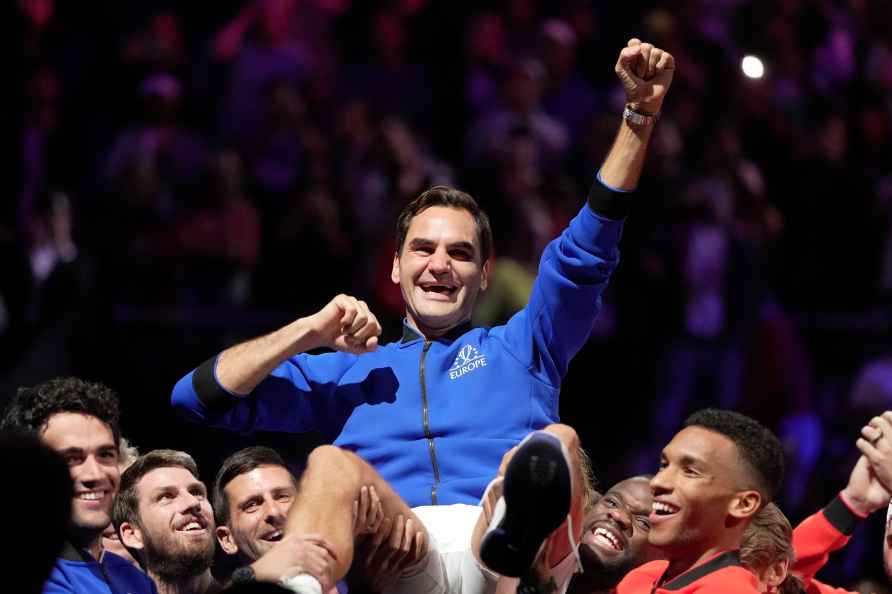 [Team Europe's Roger Federer is lifted by fellow players after playing with Rafael Nadal in a Laver Cup doubles match against Team World's Jack Sock and Frances Tiafoe at the O2 arena in London, Friday, Sept. 23, 2022. Federer's losing doubles match with Nadal marked the end of an illustrious career that included 20 Grand Slam titles and a role as a statesman for tennis. /PTI] New York, Sep 24 : World champion Magnus Carlsen will face off against talented Indian teenager Arjun Erigaisi in the final of the Julius Baer Generation Cup -- the seventh leg of the USD1.6 million Meltwater Champions Chess Tour -- after both players came through tough semifinal contests in the prestigious tournament. Carlsen battled past the determined challenge of German teenager Vincent Keymer to book his place in an event he reportedly said "I absolutely am going to win" last week. The Norwegian's stunning run of form has also left him with the chance of breaking the 2900 Tour rating barrier. Erigaisi, meanwhile, showed why he's nicknamed the "Indian iceman" with a cool and calm tiebreak win over former world blitz champion Liem Quang Le. Carlsen was made to work hard for his passage into the Meltwater Champions Chess Tour event final by his supremely-talented opponent. Keymer fought to stay in the match as both games 1 and 2 ended in draw, according to Meltwater Champions Chess Tour. But Carlsen broke through in the third after his opponent crumbled in the endgame. Keymer had defended tenaciously, but it was not enough. Carlsen heaped praise on his opponent after, saying: "I've got to say, especially the first game I was really impressed with his play. He's very, very strong. "As you can see from the end of game 3 and also game 4 he still has some challenges connected to experience and practical play, but basically he's a very good player." Carlsen's performance rating in the event has been a stellar 2934 taking his overall Tour Rating to 2883. Tomorrow, it's possible to make 2900 on the Tour. Carlsen said: "It would be nice, yeah, but most important is, whoever I face, it's about winning the match." In the second semifinal, Erigaisi played superbly to knock out Vietnam star Liem. The tussle started with a draw before the 19-year-old took the lead in the second. Erigaisi then missed a big chance in the third to decide the match by playing 35...Be1+ instead of tricky 35...Bd2. Liem survived as the game ended in a draw. The final regulation game of the match saw Liem get back in it. The speed specialist went into full attack mode before finishing Erigaisi off in style to level the score at 2-2 and take it to tiebreaks. The USD150,000 event's two-day final starts later on Saturday with the first match being a best-of-four-games encounter. The second match will take place on Sunday when the winner will be crowned. /IANS