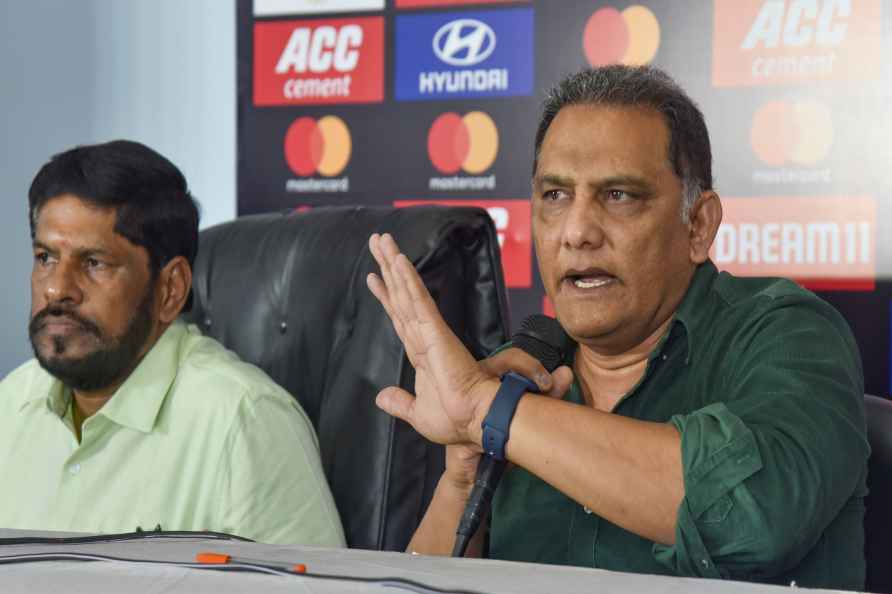 [Hyderabad: Hyderabad Cricket Association (HCA) President Mohammad Azharuddin addresses media at Rajiv Gandhi International Cricket Stadium, in Hyderabad, Friday, Sept. 23, 2022. ( /PTI] Hyderabad, Sep 23 : Chaos prevailed for a second consecutive day at Gymkhana Grounds Secunderabad on Friday as cricket fans who had booked online tickets for the T-20 international match between India and Australia had to return disappointed. Those who had purchased the tickets on Paytm for the T-20 International match to be played at Rajiv Gandhi Stadium here on September 25 gathered at Gymkhana Ground on Friday morning to get physical tickets. The fans were reportedly informed by the Hyderabad Cricket Association (HCA) to collect the physical tickets after showing the QR code, along with identity proof and a photograph. When they reached the ground, police stopped them. The fans alleged that they were not allowed even after they produced the identity proof. The HCA displayed a flexi at the entrance that it is not selling tickets at Gymkhana Ground on September 23 and 24 and appealed to fans to cooperate. The fans entered into an argument with police personnel. They were agitated over lack of clarity on the sale of tickets. Later, a team of Paytm officials reached Gymkhana to issue physical tickets to those who had made the booking online. Police were having a tough time controlling the huge crowd which had turned up for the tickets. Many who had not booked the tickets online were also waiting with the hope that the organisers will sell offline tickets. The HCA has still not come out with details like number of tickets being sold online and offline. Utter chaos prevailed at Gymkhana Ground on Thursday police resorted to lathi-charge to control unruly crowds. Scores of fans were injured in stampedes. Thousands of fans had gathered for the tickets but only two counters were opened by the HCA. Only a handful of fans managed to get the tickets. After the stampede and lathi-charge, the organisers stopped the sale. Taking serious note of the incident, Telangana Sports Minister V. Srinivas Goud summoned the HCA officials including the president Mohammed Azharuddin late in the evening to seek an explanation. The former Indian captain termed the incident "very unfortunate". He said HCA had done nothing wrong. "Public wants to see the match after a three-year gap but not all of them can do it," Azhar said and assured that HCA will take care of those who were injured. /IANS