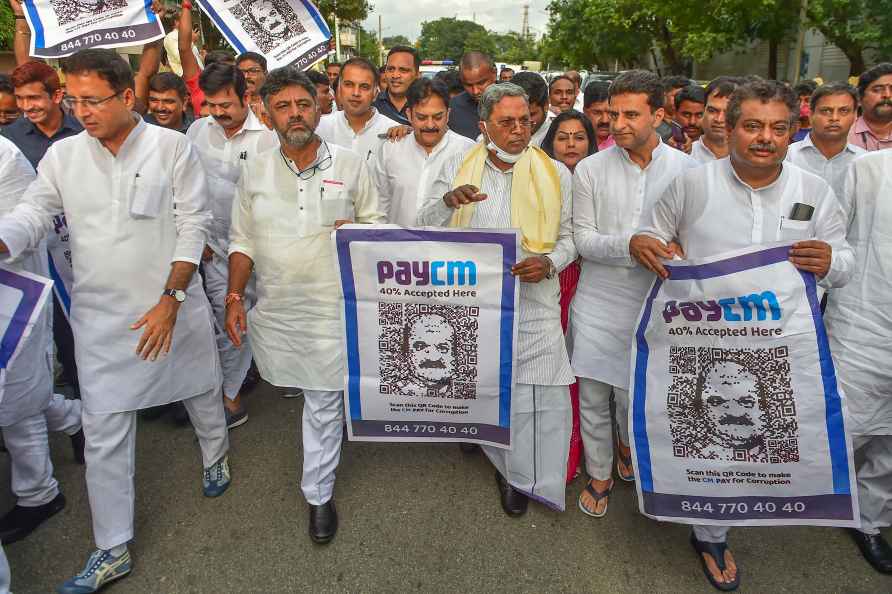 [Bengaluru: AICC General Secretary & Karnataka in-charge Randeep Singh Surjewala, KPCC President D K Shivakumar, Opposition leader in Assembly Siddaramaiah and M B Patil hold posters with QR code and the phrase 'PayCM', during a protest against the state government on the issue of alleged corruption, in Bengaluru, Friday, Sept. 23, 2022. ( /PTI] Chandigarh, Sep 23 : Alleging that the Supreme Court's judgment regarding the Haryana Sikh Gurdwara (Management) (HSGMC) Act, 2014, was influenced by Rashtriya Sawayamsevak Sangh (RSS) ideology, Shiromani Gurdwara Parbandhak Committee (SGPC) president Harjinder Singh Dhami on Friday alleged that one of the two apex court judges who delivered the judgment was associated with the RSS. Talking to mediapersons after holding the SGPC's Executive Committee meeting, Dhami alleged: "The Supreme Court judgment given by two judges regarding separate HSGMC Act is purely politically motivated and one judge among them has a direct association with the RSS. Therefore, this judgment is motivated by political interests, in place of being the one of the Supreme Court's." The SGPC president said that he had "evidence" of one judge having an association with RSS and soon, his name would be publicised. The Executive Committee of SGPC also rejected the Supreme Court's judgment of upholding the validity of the Haryana Sikh Gurdwara (Management) (HSGMC) Act, 2014, terming it politically motivated. The meeting was held at Kalgidhar Niwas, Chandigarh on Friday. The resolution clearly stated that the Gurdwara Act passed by the state government cannot affect the jurisdiction of SGPC, while The Sikh Gurdwaras Act, 1925 is in force. He said the SGPC's Executive Committee had decided to file a review petition on the Supreme Court's judgment on HSGMC Act and a special meeting of all the SGPC members has been called to discuss the future course of action at Amritsar on September 30, 2022. Dhami said that the right to make any amendment in the Sikh Gurdwaras Act, 1925, was only with the Central government and that too was possible only with the approval of SGPC's General House. He alleged that in the past Congress-led Central government had attempted to interfere in Gurdwara affairs 1959, but it had to accept the Sikh community's demand. "After the protest by Sikhs, in April 1959, a pact was reached between the then Prime Minister Jawahar Lal Nehru and Shiromani Akali Dal president Master Tara Singh, under which, it was made mandatory to take approval of SGPC's General House for making amendment in the Sikh Gurdwaras Act, 1925," said Dhami. He further said that the Sikh community was saddened that BJP and RSS were also following the footsteps of Congress. /IANS