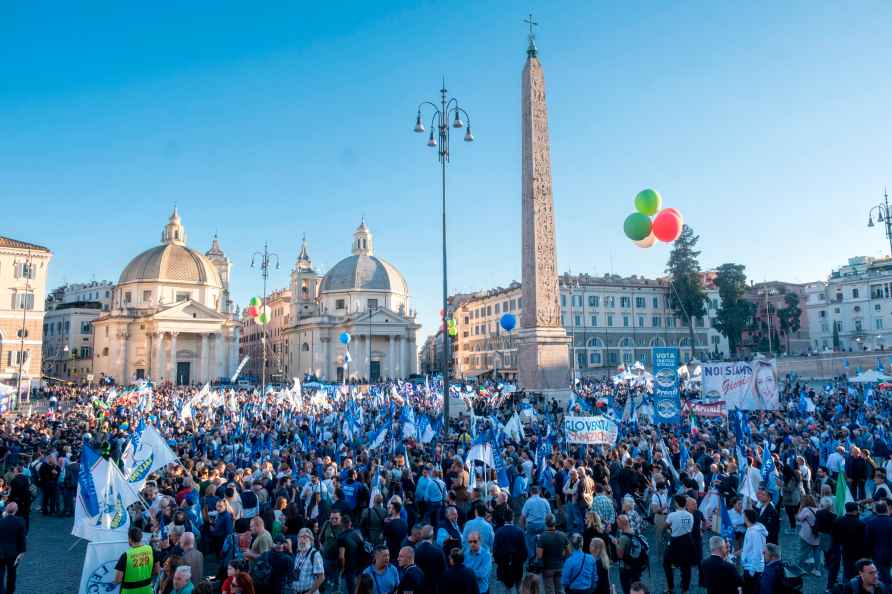 [Roma: A view of a center-right parties' rally in Rome Thursday, Sep. 22, 2022. Italians will vote on Sunday in what is billed as a crucial election on a continent reeling from the repercussions of the war in Ukraine. For the first time in Italy since the end of World War II, the balloting's outcome could propel into the premiership a leader with a far-right agenda and who is a woman. /PTI] Canterbury (England), Sep 22 : With the three-match ODI series already clinched, India captain Harmanpreet Kaur said her side is now aiming for a victory in the final match at Lord's on Saturday to give veteran pacer Jhulan Goswami an apt send-off from international cricket. "The Lord's game (on Saturday) is very special for us because it's Jhulan's retirement and we wanted to enjoy that game without any pressure and I'm really happy that we were able to win today and now we can just have fun in that game," said Harmanpreet after India defeated England by 88 runs in second ODI at Canterbury. Saturday's match at Lord's will also be the first time both India and England will be playing at the iconic venue since meeting in a thrilling 2017 ODI World Cup final, where the hosts emerged victorious by just nine runs. Harmanpreet, who led from the front with a sensational, unbeaten 143 off just 111 balls, said giving Jhulan a perfect farewell is running on India's mind. "It's very important (to win) because that will be her last game. It will be a very emotional moment for all of us and we definitely want to win that game. Moreover, after winning the series now we just want to have fun because I know it's the last game for her." Jhulan had made her ODI debut against England in January 2002 at Chennai. In a career spanning two decades, she would be leaving the international arena as the highest wicket-taker in women's cricket, with her tally currently sitting at 352 wickets across all formats. Out of those 352 international wickets currently, 252 have come in ODIs, the most by any bowler in women's cricket, apart from featuring in six women's ODI World Cups, where she is the leading wicket-taker with 43 scalps. "She's someone who has taught us a lot. When I debuted (in 2009), she was a leader and I learned a lot from her and now our young bowlers, like Renuka (Singh) and Meghna Singh, they are also learning from her. They are learning how she bowls and getting that rhythm from her. She's been a great inspiration for all of us and we've learned a lot from her," added Harmanpreet. Harmanpreet, who made her ODI debut in the 2009 Women's Cricket World Cup, when Jhulan was the captain, signed off by saying that winning the series early in Canterbury will relive them of extra pressure at Lord's. "When you win the first game, the second game is always important and we always try to finish that game as a winning side and today also we were looking at that only because we don't want to carry any extra pressure on ourselves going to Lord's." /IANS

[Roma: A view of a center-right parties' rally in Rome Thursday, Sep. 22, 2022. Italians will vote on Sunday in what is billed as a crucial election on a continent reeling from the repercussions of t […]

Hyderabad, Sep 20 : The bridegroom, whose wedding video went viral for the dance of the bride to the tunes of a popular Telugu song last year, was Tuesday caught red-handed while taking bribe. A […]