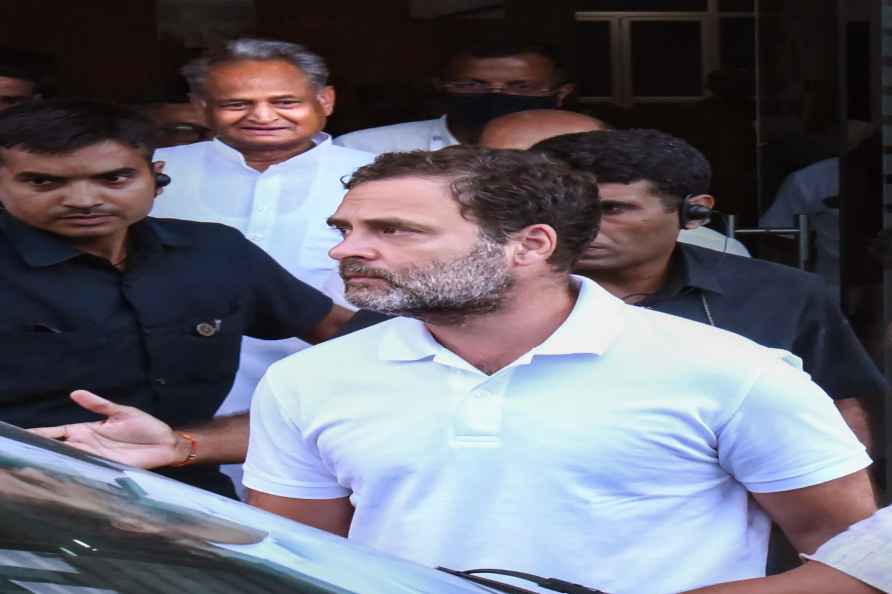 [Kochi: Rajasthan Chief Minister and Congress leader Ashok Gehlot and party MP Rahul Gandhi leave after a meeting, in Kochi, Thursday, Sept. 22, 2022. ( /PTI] Ernakulam, Sep 22 : Rahul Gandhi on Thursday hinted that the Congress will adhere to the 'one man one post' as per the Udaipur declaration. When asked, "I think we have made a commitment in Udaipur and hope that it will be fulfilled," he said. The statement comes as a big relief for Sachin Pilot, who is pitching for the Chief Ministership of Rajasthan. Gehlot is tipped to file nomination for the party president and it is likely that the party will appoint a new chief minister in Rajasthan if Gehlot gets elected. Amid hectic political lobbying, there is a likely contest between Ashok Gehlot and Shashi Tharoor while Suresh Pachauri also met Sonia Gandhi on Wednesday, besides Mukul Wasnik and Pawan Bansal. Ashok Gehlot is in Kerala to meet Rahul Gandhi. Before going to Kerala, he met Congress interim chief Sonia Gandhi on Wednesday and the meeting lasted for two hours. Sources said that Sonia Gandhi has asserted that the poll will be fair and she will not endorse any candidate. Apparently, the issue of Rajasthan was also discussed in the meeting, but there is no official word on it. Gehlot is tipped to file his nomination next week for the president's post. However, he is reluctant to leave the Chief Minister's chair in the state. The Congress' central election authority on Thursday issued a notification for the Congress president polls. According to the notification, while the nomination forms will be available from Thursday, the filing will be held between September 24 and 30. Scrutiny of nomination will take place on October 1, and the same day, a valid candidate list will be published. The last date of withdrawal is October 8 following which, a final list will be brought out. While the poll will be held on October 17, counting will take place on October 19. /IANS

For a long time, after men who destroyed my entire family and my life were released, I was simply numb, says gangrape survivor Bilkis Bano.

For a long time, after men who destroyed my entire family and my life were released, I was simply numb, says gangrape survivor Bilkis Bano. […]