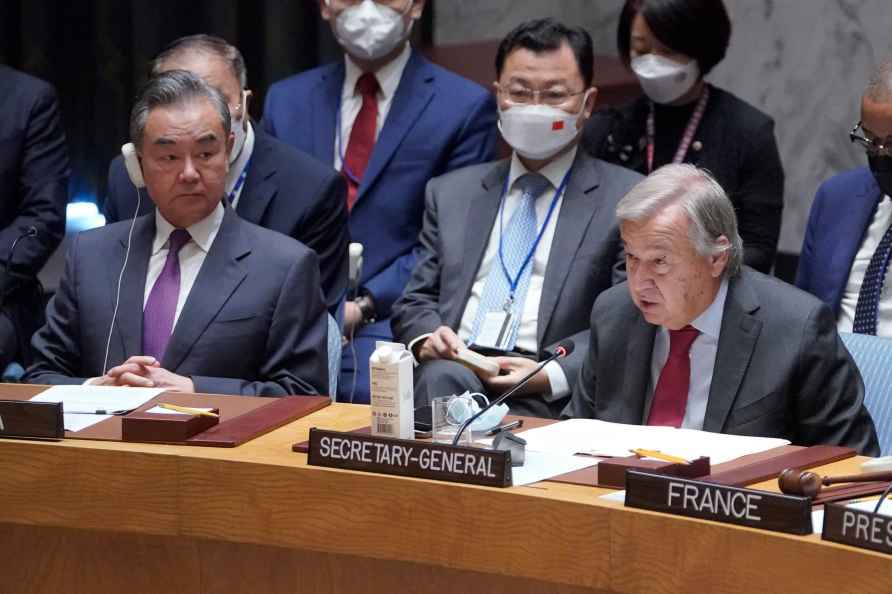 [New York:China's Foreign Minister Wang Yi, left, listens as United Nations Secretary-General Antonio Guterres speaks during high level Security Council meeting on the situation in Ukraine, Thursday, Sept. 22, 2022 at United Nations headquarters. /PTI] By Arul Louis United Nations, Sep 22 : External Affairs Minister S. Jaishankar and Indian officials pursued New Delhi's global agenda at several multilateral and bilateral meetings on the sidelines of the UN General Assembly (UNGA). On Wednesday, Jaishankar participated in the Global Crisis Response Group roundtable on food, energy and finance convened by Secretary-General Antonio Guterres. The Minister tweeted that at the meeting, he "emphasised that energy markets should not be put under further stress" and "urged that past prescriptions on climate action must be revisited". On climate change, globally there has been both backsliding, especially by some developed countries, and more urgent calls for stepped-up action by Guterres and activists citing what they say are dangerous portends. Jaishankar also hosted the 10th India-Brazil-South Africa (IBSA) Trilateral Ministerial Commission Meeting at which Carlos Alberto Franco Franca from Brazil and Mondli Gungubele from South Africa participated. He tweeted that they reviewed IBSA's activities and appreciated the promotion of South-South cooperation. At the meeting, a report by four think-tanks from the IBSA countries was released. Jaishankar said that during a meeting with the UK's Foreign Secretary James Cleverly, he shared his "concern about the security and welfare of the Indian community in UK" where there has been an attack on a Hindu place of worship. He said that he welcomed Cleverly's "assurances in that regard", adding that they also discussed taking forward Roadmap 2030, an ambitious programme for cooperation adopted last year that covers trade, strategic affairs, defence in the Indian Ocean and Indo-Pacific regions, climate change and health. "Our conversation also covered global issues including Indo-Pacific, Ukraine and UNSC (Security Council) matters." Following a meeting with Bolivia's Foreign Minister Rogelio Mayta, Jaishankar said they discussed "our development partnership and expanding our economic engagement". With Norway's Foreign Minister Anniken Huitfeldt, the topics of discussion were Nordic partnership, Afghanistan, Ukraine and climate action. Ukraine again figured in the talks with Estonia's Foreign Minister Urmas Reinsalu, according to a tweet by Jaishankar. They also discussed the "deepening of bilateral cooperation following opening of our Embassy" in the capital Tallinn, he said. Earlier on Wednesday, Jaishankar met Ukraine's Prime Minister Denys Shmyhal, who asked India to join forces in countering Russia's aggression against Kiev. Ashwini Vaishnaw, the Minister of Electronics and Information Technology, addressed the UN on "The Future of Digital Cooperation". Meanwhile, External Affairs Ministry's Secretary West, Sanjay Verma spoke at the 12th Ministerial Global Counter-Terrorism Forum. Calling for zero-tolerance for terrorists, he said: "Threat of terrorism is grave and universal and can only be defeated by the collective efforts of the international community." Verma also represented India at the ministerial meeting of the Non-Aligned Movement, where, Verma said he "met some of our long-standing partners in NAM and raised issues of common concerns". Yet another meeting he attended was the high-level panel discussion hosted by Bangladesh and UN Habitat on Ensuring Safe and Affordable Housing for All. Verma tweeted that he shared information on Indiaas affordable housing programme and its assistance to countries in the region. External Affairs Ministry Joint Secretary Srinivas Gotru spoke at the UN's High-Level Meeting on the Rights of Minorities. (Arul Louis can be contacted at aru.l@ians.in and followed at @arulouis) /IANS