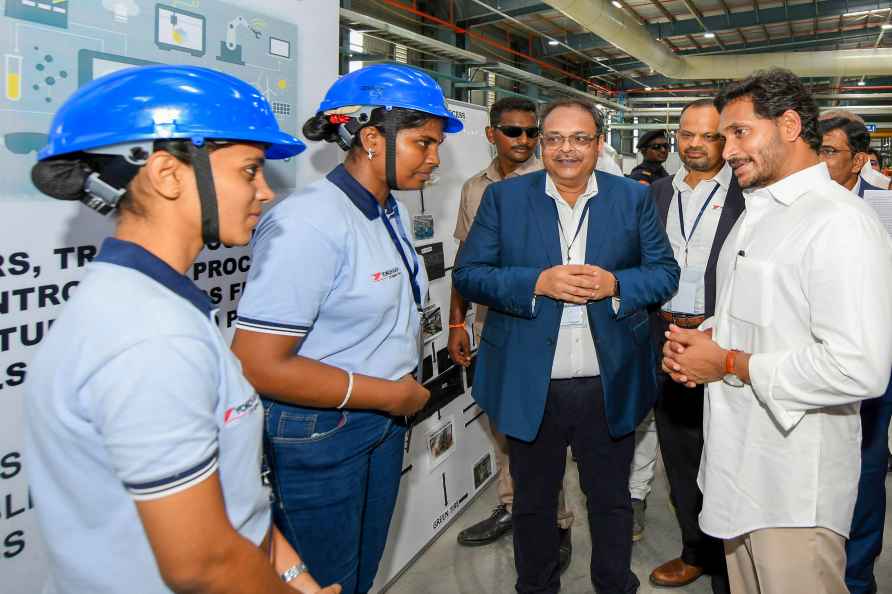 Amaravati, Sep 20 : Andhra Pradesh Chief Minister Y.S. Jagan Mohan Reddy on Tuesday said that his government brought major changes in education and healthcare sectors. He told the Assembly that the amount being spent on education is an investment for a better future as it works in shaping the generation next into a confident and competent youths to start their careers, while drastic changes in the medical and health sector are being brought in to bring quality medicare within the reach of the needy. Concluding the short discussion on education and healthcare, the Chief Minister said that his government has been striving not just for right to education but for right to English medium and right to higher education with incentives from pre-primary to college education. He alleged the previous government had tried to push back government schools into oblivion to benefit corporate schools with vested interest. "We have chalked out our priorities well and wanted to see that the Gross Enrollment Ratio (GER) is drastically improved by providing incentives and also revamping the schools under Nadu Nedu. We have instructed that 12 visible changes should be in place in the government schools which include, toilets, clean drinking water, repairs, tube lights and fans, furniture for students and teachers, green chalk boards, painting, English lab, compound wall, kitchen shed, additional rooms and digital interactive panels," Jagan Mohan Reddy said. He said even pre-primary foundation schools and anganwadi hostels are also being developed under the Nadu Nedu programme. In the first phase, 15,715 schools were revamped with a cost of Rs 3,700 crore and the digitisation of class rooms will be in place from next academic year. Telling the house that the second phase of modernisation has started, he made a visual presentation of schools in Leader of Opposition Chandrababu Naidu's birthplace Naravaripalle and Kuppam (Naidu's constituency) before and after taking up the Nadu Nedu programme. "The GER in primary schools for 2015-16 in the state was very poor and we could increase it drastically through the schemes like Amma Vodi, Goru Muddha, Vidya Deevena, and Vasathi Devena. While government schools had 37.20 lakh student in 2018-19, the numbers increased to 44.29 lakh in 2021-22," he said. Amma Vodi has been a unique scheme under which mothers are incentivised to send their children to school with Rs 15,000 per annum with the rider of 75 per cent attendance and Rs 1,000 each should be contributed toward toilets and School Maintenance Funds for upkeep of schools. During the three years, Rs 19,617 crore was spent under the scheme. Under Gorumuddha, with daily changing menu and nutritious food, the state has been spending Rs 1,800 crore while it was just Rs 450 crore annually by the previous government, which did not clear the dues of ayas and provisions as well, he said. Vidya kanuka kits with a school bag, bilingual text books, work books, note books, three pairs of uniform, shoes, two pairs of socks, dictionary are being given to students on the school reopening day itself, and this cost Rs 886 crore. He announced that for Class 8 students and teachers, 5.18 lakh tabs would be given in November last week. The tabs would have a preloaded Byjus content which would serve as a home tutorial, the Chief Minister said. The Byjus content, which would otherwise cost about Rs 24,000 would be given free of cost. Vidaya Deevena is the other incentive where full fees reimbursement is given along with Vasathi Devena, which takes care of the hostel and mess charges, and the total amount works out to Rs 11,717 crore. On the medical front, YSR Village Clinics and the concept of Family Doctor is being worked out so that village clinics and PHCs take care of preventive medicine while the CHCs, area and district hospitals take care of the curative treatment. Every mandal will have four doctors and two ambulances with one doctor and an ambulance touring villages assigned and the regular visits would familiarise them with the patients and their ailments, thus developing a rapport. Of the 10,032 village clinics, 3,673 are ready and an amount of Rs 1,692 crore spent and the project would be completed by year end. Staff recruitment will be done by October 15, he said. Jagan Mohan Reddy revealed that in addition to the 11 teaching hospitals, another 17 hospitals are coming up. /IANS

Coordinated moves by Russian-backed separatists in Ukraine to stage referendums
Moscow, Sep 20 : Dmitry Medvedev, the hawkish long-term ally of Vladimir Putin, has suggested that the self-proclaimed separatist regions of eastern U