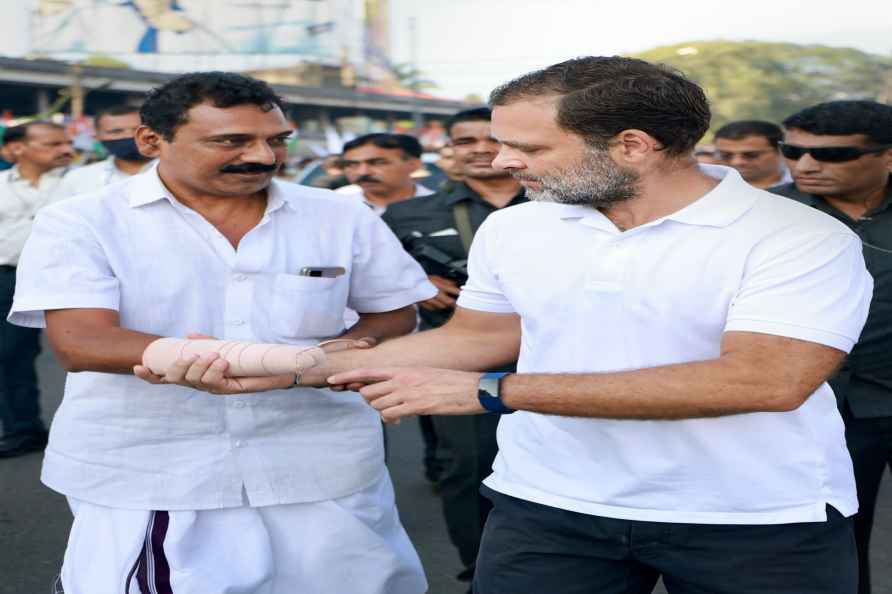 [**EDS: HANDOUT PHOTO MADE AVAILABLE FROM AICC OFFICE ON THURSDAY, SEPT. 22, 2022** Ernakulam: Congress leader Rahul Gandhi and others during the 15th day of party's 'Bharat Jodo Yatra' in Ernakulam, Kerala, Thursday, Sept. 22, 2022. ( /PTI] Bhopal, Sep 22 : Congress veteran and Rajya Sabha MP Digvijaya Singh (75) is probably the oldest leader covering 24 km on foot daily along with former party president Rahul Gandhi and thousands of others as part of the ongoing 'Bharat Jodo Yatra.' Singh, who is one of the planners of this 3,500 km march from Kanyakumari to Kashmir, has been accompanying Rahul Gandhi since the yatra started on September 7. In a picture going viral in the media, the veteran leader -- who often makes headlines with his comments particularly on RSS and BJP or even the issues related with his own party -- can be seen sleeping on a mattress on the floor without a pillow with just a thin towel wrapped around his forehead. The picture is being extensively shared by Congress leaders on social media highlighting his simplicity and calling his dedication an example for youth party workers. A young Congress leader from Rewa, Siddharth Tiwari (Raj), who is the grandson of former Madhya Pradesh assembly speaker (late) Sriniwas Tiwari and the son of former Lok Sabha MP (late) Sundarlal Tiwari, wrote in his twitter handle, "Karma yogi don't say anything, make noise! Keep this journey going, towards new horizons. Showing the spirit of sacrifice, penance and dedication for the nation, this picture is respected. This dedication inspires all of us to sacrifice everything for the service of the country and society." Digvijaya Singh had exhibited the same simplicity during his 192-day long "Narmada Yatra" before the 2018 Assembly elections. Then also, he used to sleep on the floor, said one of his associates, who had accompanied him during the entire 'Narmada Parikrama'. The current photograph was captured when Digvijaya, along with some other party workers, went to rest after a day-long foot-march - "Bharat Jodo Yatra," said a MP Congress leader. Meanwhile, alongside the "Bharat Jodo Yatra", the grand-old-party is gearing up for its president's election. The senior leader had also hinted at joining the race with Rajasthan Chief Minister Ashok Gehlot and Lok Sabha MP from Thiruvananthapuram (Kerala) Shashi Tharoor. Though Digvijaya Singh has hinted at the party's presidential race for the first time, it has been doing rounds here in Madhya Pradesh for the past few weeks. /IANS