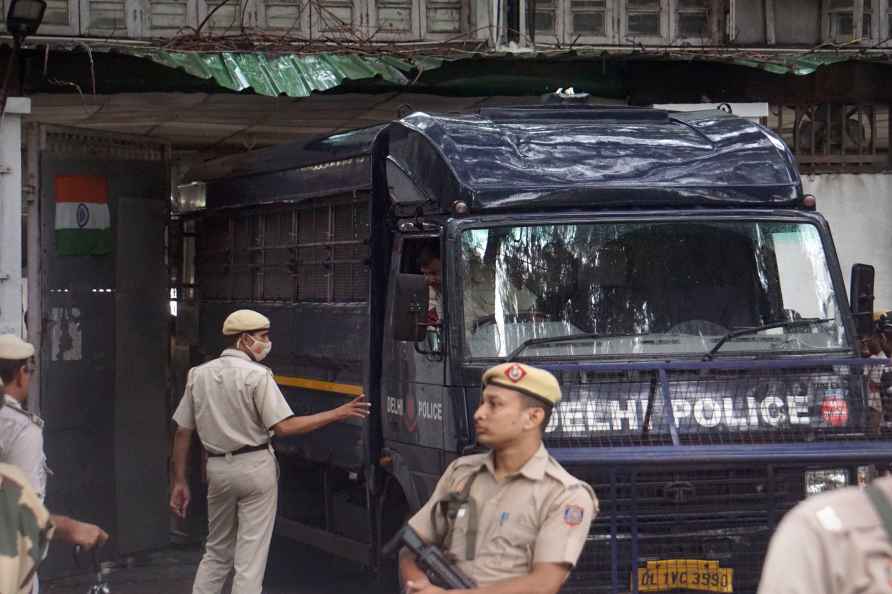 [New Delhi: Accused being produced to Patiala Court after a nationwide raid spearheaded by the National Investigation Agency (NIA), in New Delhi, Thursday, Sept. 22, 2022. As many as 106 activists of the Popular Front of India were arrested on Thursday in early morning raids. ( /PTI] Chennai, Sep 22 : Shocked by early morning raids across the country, the Popular Front of India (PFI) is planning protest marches across Tamil Nadu on Thursday. The National Investigation Agency (NIA) and the Enforcement Directorate (ED) conducted raids in many places across Tamil Nadu. The raids are part of a nationwide search and raid operation against the PFI in various parts of the country. NIA sources told IANS that 106 Popular Front leaders were taken into custody since the early morning raids across the country. The National President of the organisation, O.M.A. Salam and its General secretary, Naseerudin Elamaram were among those who have been taken into custody. The raids, according to the NIA, is due to certain incriminating documents the agency has received while probing terror funding and the murders the organisation in Kerala and Karnataka is accused of. Three RSS leaders, Sanjith, Adv Ranjith, and Sreenivasan were killed by the Popular Front activists in Palakkad and Kollam districts of the state. A Hindu Munnani and Bajrang Dal activist Harsha was killed by alleged PFI activists in Shivamoga in Karnataka state. Several documents were seized during the raids conducted after the murders of these people and it was, according to certain sleuths of NIA, found that the Popular Front had prepared a list of RSS and other Hindu activists who were to be killed. The NIA and ED raids are due to these killings as also documents indicating funding. A Popular Front activist, Nasser was earlier taken into custody from Ernakulam in Kerala and he had, according to sleuths, revealed about the funding modus operandi of the Popular Front of India. The NIA and ED on Thursday morning conducted raids at Chennai, Coimbatore, Tirunelveli, Kanniyakumari, Dindigul, Salem, Ramanathapuram, and Erode areas of Tamil Nadu. The raids at the PFI state committee office in Chennai were conducted at 3.30 a.m. and it lasted till 8 a.m. Sources in the NIA told IANS that some documents were seized from the office. The PFI, according to its leaders, will be conducting a protest march to the NIA Tamil Nadu head office in Chennai later in the day. Roads have been blocked in many parts of the state by the PFI and SDPI activists. A heavy contingent of CRPF and other central police agencies were providing security to the NIA and ED teams who conducted the raids at the PFI offices. /IANS

Gyanvapi case: Varanasi court rejects Muslim plea, next hearing on Sep 29
[Varanasi: Advocate Vishnu Jain, appearing for the Hindu side, interacts with the media after a hearing of the Gyanvapi Masjid-Shringar Gauri Temple c

New Delhi, Sep 20 : The Delhi High Court on Tuesday kept in abeyance an order of the Central Consumer Protection Authority (CCPA) which imposed a cost of Rs 1 lakh on e-commerce platform Amazon for se […]

[Hubballi: Police attempt to detain Popular Front of India (PFI) and Social Democratic Party of India (SDPI) workers during a protest against the raid of National Investigation Agency (NIA), in Hubbal […]

[New Delhi: Accused being produced to Patiala Court after a nationwide raid spearheaded by the National Investigation Agency (NIA), in New Delhi, Thursday, Sept. 22, 2022. As many as 106 activists of […]

[Varanasi: Advocate Vishnu Jain, appearing for the Hindu side, interacts with the media after a hearing of the Gyanvapi Masjid-Shringar Gauri Temple case at Varanasi District Court, Thursday, Sept. 22 […]