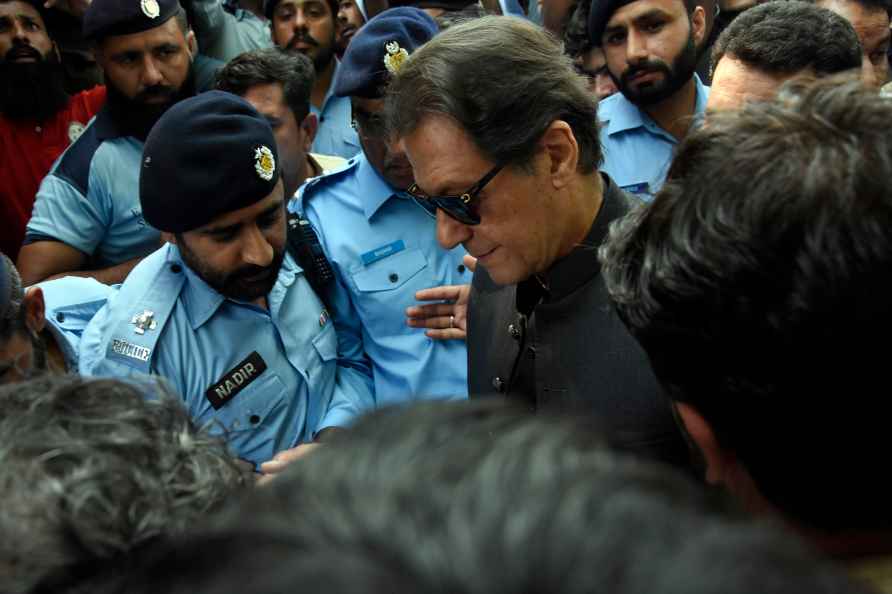 [Former Pakistani Prime Minister Imran Khan, center, arrives to the Islamabad High Court surrounded by security in Islamabad, Pakistan, Thursday, Sept. 22, 2022. Khan apologized in court on Thursday over his outburst against a female judge last month that was perceived as a threat to the judiciary and judges in general. The apology allows Khan, who was ousted in a no-confidence vote in April, to stay out of jail and avoid contempt charges and comes just days after Pakistani police were ordered by a judge to drop terrorism charges against him. ( /PTI] Islamabad, Sep 22 : In a surprise move, PTI Chairman Imran Khan finally apologised on Thursday before the Islamabad High Court (IHC), as the hearing started in a contempt of court case against him for making controversial remarks about Additional District and Sessions Judge Zeba Chaudhry during a rally in Islamabad on August 20, media reports said. Khan appeared before the court amid strict security, Geo News reported. The court on Thursday was set to frame charges against the former Prime Minister during the hearing. However, Khan offered apology at the outset of the hearing. "I apologise if I crossed any line. It won't happen again. I never intended to hurt the sentiments of the court," Khan said while assuring the court of never committing "such an act again", the report said. He also requested the court to allow him to apologise to judge Zeba Chaudhry in person. IHC Chief Justice Athar Minallah said that the court is not framing charges against Khan on Thursday. "The court values your statement [made] before the court. You understood the gravity of your statement, we appreciate that," Minallah said, directing the PTI chair to submit a written affidavit of what Khan said in the court, Geo News reported. The court recorded his statement and adjourned the hearing till October 3. /IANS