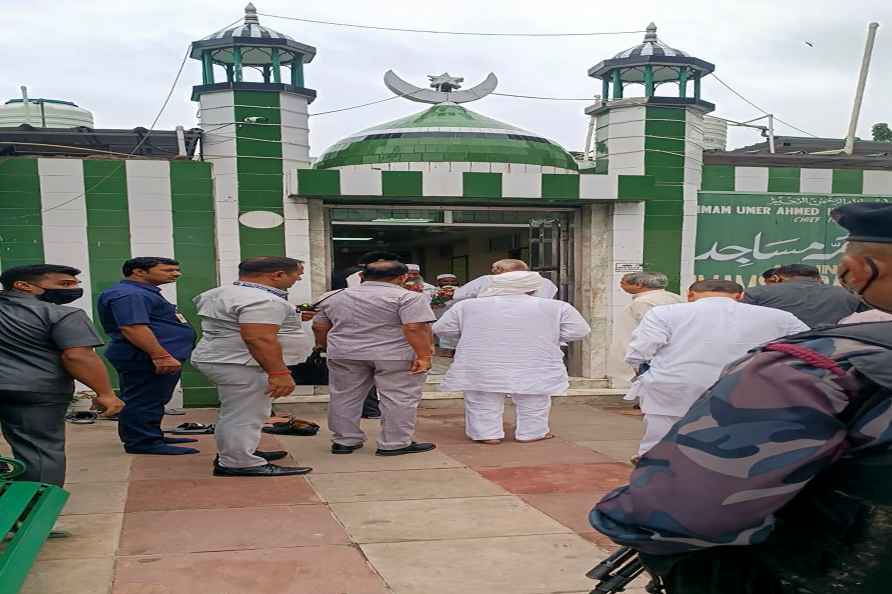 [New Delhi: Rashtriya Swayamsevak Sangh Chief Mohan Bhagwat during his visit to meet All India Imam Organisation Chief Umer Ahmed Ilyasi, at a mosque in New Delhi, Thursday, Sept. 22, 2022. ( /PTI] New Delhi, Sep 22 : After meeting RSS chief Mohan Bhagwat on Thursday, Imam Umer Ahmed Ilyasi, the chief of All India Imam Organisation said that Mohan Bhagwat is 'Rashtra Pita (father of the nation) and a 'Rashtra Rishi' (sage of the nation ). Talking to IANS after the meeting, Ilyasi said: "Mohan Bhagwat visiting us is a privilege. Bhagwat came to Imam House for a meeting and he is our Rashtra Pita and Rashtra Rishi. The unity and integrity of the country should be maintained. We may all worship in a different way, but before that we all are human. We live in India and are Indians." "India is on the verge of becoming Vishwa Guru and we all should strive for it," he said. When asked if he referred to Bhagwat as 'Rashtra Pita', Ilyasi said, " Absolutely, he is 'Rashtra Pita' (father of the nation)." Umar Ilyasi's brother Suhaib Ilyasi said, "Our father had an old relationship with the Sangh. Mohan Bhagwat had come to the mosque on the death anniversary of Jameel Ilyasi. It was a family programme and it should be seen in that context only." Bhagwat had held discussions with Muslim intellectuals for strengthening communal harmony, Suhaib Ilyasi said. The RSS Chief met Imam Umer Ahmed Ilyasi at his office in a mosque at Kasturba Gandhi (KG) marg in the national capital. Providing details about the meeting, RSS prachar pramukh said, "RSS chief meets people from various sections of society. It is a part of continuous conversation (Samvad) process. " Bhagwat, who has been trying to reach out to Muslims, in August too had met Ilyasi. Recently, Bhagwat had held discussions with Muslim intellectuals for strengthening communal harmony. In the August 22 meet, Bhagwat had met former Chief Election Commissioner S Y Quraishi, former Delhi Lieutenant Governor Najeeb Jung, former Aligarh Musilm University vice chancellor L-G (retd) Zameer Uddin Shah, former MP Shahid Siddiqui and Industrialist and social worker Saeed Sherwani. /IANS