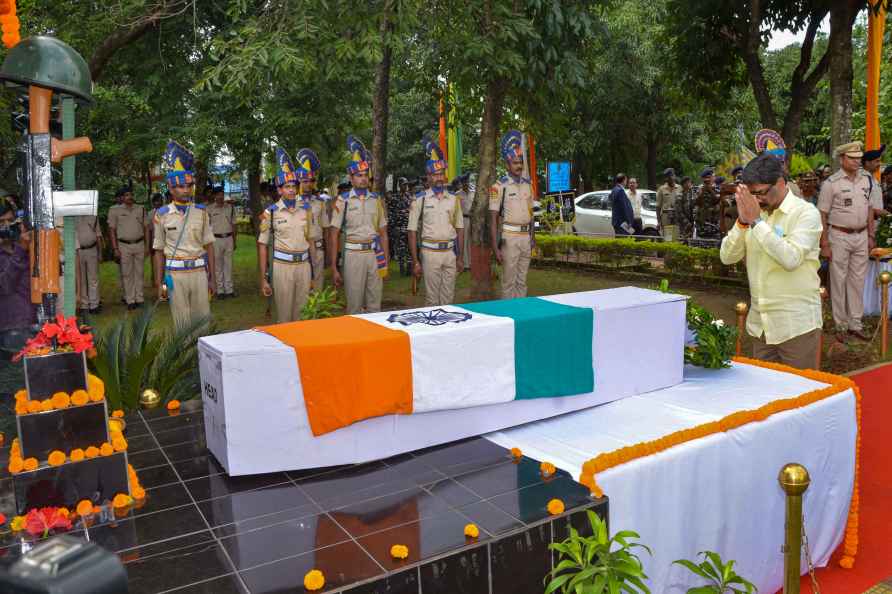 [Ranchi: Jharkhand Chief Minister Hemant Soren pays his last respects to Central Reserve Police Force (CRPF) jawan Chitaranjan Kumar, in Ranchi, Thursday, Sept. 22, 2022. Kumar got injured in an encounter with Maoists in Chatra on September 18, and later succumbed to his injuries at a hospital in Ranchi. ( /PTI] Patna, Sep 22 : Union Home Minister Amit Shah congratulated the government forces for freeing Buddha Pahad in Jharkhand after almost three decades from the domination of Maoists. The Maoist-dominated area has been freed under Operation 'Octopus' of Jharkhand police, Chhattisgarh police, Telangana police, CRPF Cobra battalion, Jaguar assault unit and IRB on Wednesday. "A historic milestone in the internal security of the country has been crossed. Under the leadership of PM @narendramodi ji, the security forces have achieved unprecedented success in the decisive battle against Left Wing Extremism across the country. Congratulations to @crpfindia, security agencies and state police forces for this," Shah tweeted. "For the first time, permanent camps of security forces have been established by successfully removing Maoists from the inaccessible areas of Buddha Pahad, Chakrabandha and Bhimabandh. Under the leadership of @narendramodi ji, the policy of zero tolerance of the Ministry of Home Affairs against terrorism and LWE will continue and this fight will intensify further," he said in another tweet. The joint forces managed to free Buddha Pahad located in Jharkhand's Latehar district, about 150 km from state capital Ranchi. Buddha Pahad is spread in about 55 square km with one side connected with Chhattisgarh. It had turned out shelter of top naxal commanders of Bihar, Jharkhand, Chhattisgarh, Telangana, Andhra Pradesh, Maharashtra, West Bengal and Odhisha. The joint forces have learnt time to time about the presence of top Maoist commanders and strategists like Arvind Singh alias Dev Kumar, Sudhakaran, Mithilesh Mahto, Vivek Arya, Pramod Mishra, Vimal Yadav and many others. They held Buddha Pahad for 32 years and developed many combat training camps, bunkers, arms and ammunition depots there. Located on a mountain surrounded by deep and dense jungle of Latehar and Garhwa district of Jharkhand, Buddha Pahad turned out to be a safe heaven for Maoists due to its location. Maoist groups had placed land mines on every possible way going towards their camps established on the top of Buddha Pahad. Jharkhand DGP Neeraj Sinha went to Buddha Pahad by helicopter a couple of days ago and congratulated the joint forces. He appreciated the brave Jawans of different units who established their camps in the Maoist-dominated area. Operation Octopus was kicked off one and half months ago and it was completed on last Friday. The MI helicopter of the Indian Air Force (IAF) was also landed on the top of the Buddha Pahad. A.V. Homkar, the IGP (Operation) of Jharkhand police said: "The joint forces managed to capture Buddha Pahad and establish a camp there. It is a great achievement to fight with Maoists of the country." Jharkhand police is supplying food and ammunition to Jawans through helicopters. Many times in past as well, the security forces made plans to capture Buddha Pahad. However, serious efforts were started in 2018 under the leadership of D.K. Pandey - the then DGP of Jharkhand. During the tenure of D.K. Pandey, the security forces applied pressure on the families of Maoists and also worked on cutting the supply of food and ammunition from the villages in the foothills of Buddha Pahad in Latehar and Gadhwa district of Jharkhand and from Chhattisgarh. Police also worked on gaining the trust of villagers as well. On many occasions, security forces have distributed Sharis, clothes, food items and others to the villagers. "The surrender policy of security forces worked well when more than three dozens Maoists commanders laid down their arms before police and surrendered. Due to a cut of the supply chain, Arvind Singh, who was owing Rs 1 crore reward on his head died due to medical aids. He was ill for a long time and security forces cut the supply chain there. Following his demise, Sudhakaran and his wife were appointed as in-charge of Buddha Pahad. Two years later, Sudhakaran and his wife surrendered before the Telangana police," said an official of Jharkhand police. "After the surrender of Sudhakaran, over one dozen top Maoist commanders also surrendered before different security agencies," he said. "Jharkhand police received an input about top naxal commander Saurav alias Makrus Baba, regional committee members Navin Yadav and Chotu Khaiwar along with 50 other naxal were present in Buddha Pahad in July this year. Accordingly, the joint team decided to free Buddha Pahad from them forever. The joint assault team headed by Jharkhand police ADGP (Operation) Sanjay Anand Lathkar, STF DIG Anup Birthare started operation Octopus. The SP of Latehar and Garwa were also included in the team," the official added. "During the operation, the joint forces combated head on for more than six times during last one and half months. Eventually, our forces managed to capture a big bunker of Maoists. They also recovered 106 land mines, 350 live cartrides of SLR, 25 arrow bomb, 500 meters codex wire and a large amount of explosives. Following the capture of that bunker, the morale of other Maoists broke down and they fled from Buddha Pahad on September 5," he said. /IANS

Custom Lamborghini gifted to Assam CM by a car mechanic

Guwahati: Nurul Haque, a car mechanic from Karimganj arrives in his custom made Lamborghini lookalike, developed from an old Maruti Suzuki Swift, to gift it to Assam CM Himanta Biswa Sarma, in Guwahat […]